Wednesday, 21 November 2012
3
Luis Merino
The Kliux vertical axis small wind turbine is just three years old but is already turning heads. The founding fathers of this Rioja-based company, the Equizábal brothers, combine the skills of a Chicago stockbroker and a design wizard and they firmly believe that innovation and R&D can provide a springboard out of the recession. 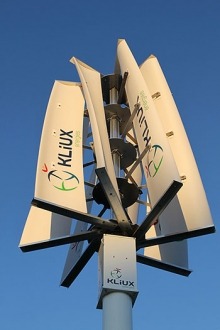 In March 2011, Kliux Energies presented its brand new vertical axis turbine before the president of the Rioja regional government, Pedro Sanz. The machine was part of a mini wind power and photovoltaic hybrid project, located in the town of Pradejón, within the grounds of the Talleres Morte industrial plant, Kliux's industrial partner. The event was a milestone for a project whose seed was planted a long time ago in the heads of Iñaki and Juan José – the Equizábal brothers.

"I had worked for 20 years in Chicago," says Inaki, now 24. "I worked there in capital markets, fund management, capital risk and an endless chain of other financial services," he explains. During that time, he noticed how many of those funds invested in communication technologies and clean and renewable technologies. "Logically, you think that if the big players are investing, there must be something in it," he muses.

Brother Juan José has also lived many years abroad; in Argentina. "We are very different people," says Iñaki. "I am a colder more pragmatic person, probably a result of living in USA so long. My brother is an artist; a genius. He is very sharp minded with a great grasp of things. We complement each other really well."

At some point in the conversation the topic of wind tunnels crops up and Formula 1 springs to this journalist's mind, thinking Juan José Eguizábal is to Kliux what Adrian Newey is to Red Bull: a genius (Newey) in aerodynamics who, in recent years, has managed to design a car that can hold its own against teams like MacLaren or Ferrari. For his part, Iñaki is a man of finance; the one whose mind is on business development and international expansion. And in that field he is a veritable whirlwind. It does not take long being with him to realise his mind never rests still for a moment.

Currently, Kliux is exclusive manufacturer and dealer of the GEO 1800 vertical axis wind turbine, developed by Geolica Innovations. That is the first company the Eguizábal brothers created and it is still their research centre as well as a laboratory for distributed energy solutions and products. Kliux also provides wind turbine-photovoltaic hybrid systems. Furthermore, through its partnership with Teknica Lighting, Kliux also offers energy efficiency and lighting solutions.

Strength through partnerships
Kliux has come to form "what is possibly the biggest engineering team in the whole of Rioja, with 24 people," claims Iñaki. That team is the heart of the company and is devoted entirely to innovation and engineering. "As Kliux has no factory, we've outsourced to Tallers Morte," says Iñaki. That partner, in turn, buys in components for assembly from other companies both in and outside Spain. "So, on top of our 24 direct employees you should add maybe another 200 indirect jobs," reckons Iñaki.

Furthermore, the brothers have managed to bring on board the highest level technology partners, such as Bayer Material Science (BMS). "We were looking for a good material for the turbine blades and challenged them to make them in expanded polyurethane," says Iñaki: "They took it on and have since become deeply involved in the project; to such an extent, in fact, that some of the companies top dogs in Germany have a model of the turbine in their offices." Bayer must have clearly seen not only the machine's potential but also the quality of the people behind it because they invited Kliux to join the consortium of companies working on the "Smart City Ruhr" project, aimed at finding innovative solutions to integrating renewable power through intelligent grids. Kliux is the only non-German company in the consortium.

In June 2011, a 6 kW hybrid wind-photovoltaic system, using the Kliux Geo 1,800 W wind turbine, was installed at Bayer 's offices in Tarragona, Spain. The blades for the machines were made with Polyurethane Systems Iberia materials. That company, an arm of BMS, continues researching new polyurethane systems for manufacturing other small wind turbine components, such as axes or binders.

But there are also other strategic, industrial and technological partners, such as the University of Rioja, the Rioja Regional Government's Economic Development Agency (ADER), the University of Zaragoza's CIRCE Foundation and the Centre for Technological Development (CDTI). When the Eguizábal brothers initiated the project, they did so using their own capital. But in the past three years, more and more partners have joined with participation loans.

The initial need to thoroughly study where to invest money has set the pattern of developing cutting edge technology without squandering money. "We have carried out virtual designs, installations and testing, all using virtual wind tunnels. Just in a year and a half we have made spectacular progress, and for much less money than if we had had to build and test real models."

The seven machines so far installed represent just the beginning for a machine with enormous improvement potential. "It is our first wind turbine; our 1.0 version. I know we are in a highly competitive sector but I believe that we have one of the best machines on the market."

In order not to miss a trick in innovation, Kliux is involved in 22 international and national innovation projects, with such diverse aims as improving control electronics or reducing blade weight, for instance. The vibes are good, not just at home but abroad too. "Our rep in Japan says we're a sensation there. And, on seeing the machine in action, a small wind expert in South Korea, who travelled half the world to view the machine, could only say 'Wow!'."

Towards the energy internet
What has driven the Eguizábal brothers' commitment to small, vertical axis wind technology is their vision of how energy will be in the future; a future that is shaping up now. "There are 755 million homes in the world with no power supply. In USA alone, half a million homes are not connected to the grid. In India, there are 250,000 remote mobile telephone masts powered with stand-alone and very expensive diesel generators. Our turbine is a cheaper, cleaner and more convenient solution for all those needs," says Iñaki. "I think the future lies in isolated intelligent micro grids. Those networks can later link up together, forming larger intelligent grids."

Kliux' website describes this view of the future: "We support the 3rd industrial revolution, which will transform the energy generation and distribution system in the world, shifting power to the user-cum-generator. Internet will facilitate these advanced intelligent grids, which will optimise the balance between generation, transmission and consumption."

But the reality of this grid, made up of many micro grids, first requires knowing how to act at grass-roots level, close to the consumer. And if there is one thing that the mini wind sector complains about right now it is the gross ignorance that reigns in that area. "Local regulations for small wind power are in their infancy. But work is underway on an overall regulation for all, defining who should use which turbine, how and where. We must also make steps towards net metering. We've been waiting for news on this matter for months, but there's still nothing doing. Meanwhile, in Japan, for instance, they passed the highest rates in the world for self-supply generation. Other advanced countries like Germany and USA also have specific regulations in this field."

Talking of USA, by time this magazine reaches its readers, the presidential elections will have been decided, with the possibility that Obama—himself closely linked with Chicago—is returned to office. So, now for the inevitable question: Who is to be, Obama or Romney? "Obama, of course," says Iñaki without hestitation. And will there be a return to USA with Kliux? "Probably; in order to introduce and distribute the turbine. Maybe in 2014 we'll return to Chicago, which, by the way, is also known as the Windy City."

Meanwhile, Kliux is working flat out on the market development and internationalisation of its products. In fact, it is actively searching distributors and installers in Germany, South Korea, Japan, Mexico, Brazil and India; countries which could soon enjoy the silent gliding motion of this turbine.

What is the GEO 1800 turbine?
The GEO 1800, with Kliux proprietary design and patent, combines the drag-type and lift-type vertical axis rotor models in a single unit. It has eight blade fins with two different profiles: four with alpha profile and for with beta. The alpha profile receives the wind and channels and holds it the longest. It taps the maximum energy possible, creating the drag. The beta profile is designed to pick up the wind that leaves the alpha profile using it to create lift, like on the wings of an aeroplane, so the rotor "flies", facilitating rotation.

And the price?
"The important thing isn't so much how much the device costs as how much the kilowatt-hour produced costs and what you compare that cost with," explains Iñaki Eguizábal: "We are currently producing at 18-20 euro cents per kilowatt-hour and it's going down. We are already much cheaper than diesel generators, for instance."

Tags: Wind ,Grid ,Wind turbine ,Photovoltaic ,Hybrid ,Germany ,Japan ,India ,Spain ,Aerogenerador ,Jobs ,Renovables ,Energy Efficiency ,Efficiency ,Argentina ,México ,Eólica
Add a comment
Benefits of Ginger
Pretty good post. I just stumbled upon your blog and wanted to say that I have really enjoyed reading your blog posts. Any way I’ll be subscribing to your feed and I hope you post again soon. Benefits of Ginger
Mike
My family wants to start some turbine business soon. Thanks for technical details, really appreciated. http://agroturystyka.adverts.pl
zeeshan khatri
So it is interesting and very good written and see what they think about other people. Hair Combs for Wedding New York
¡Suscríbete!
biogas