Monday, 04 October 2021
0
REM
The Maine Governor’s Energy Office has submitted an application to the Bureau of Ocean Energy Management to lease a 15.2-square-mile area nearly 30 miles offshore in the Gulf of Maine for the nation’s first floating offshore wind research site in federal waters. 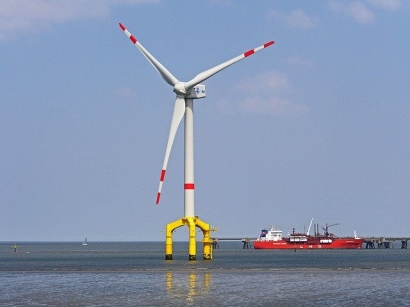 Image by Erich Westendarp from Pixabay

The state hopes to deploy a small-scale research array of 12 or fewer wind turbines on innovative floating hulls designed at the University of Maine. This project will advance UMaine’s patented technology and will foster leading research into how floating offshore wind interacts with Maine’s marine environment, fishing industry, shipping and navigation routes, and more.

The area of the research site is limited to 15.2 square miles, which is smaller than initial projections and which represents approximately .04 percent of the 36,000-square-mile Gulf of Maine. This limited site is 29 miles from the nearest mainland point of Cape Small in Sagadahoc County, 23 miles from Monhegan, and 45 miles from Portland. It was selected following an extensive public outreach process led by GEO, which included an analysis by the Maine Department of Marine Resources (PDF) that helped identify areas that minimized known potential impacts on the fishing industry.

“Maine is uniquely prepared to create good-paying jobs across the state and reduce our crippling dependence on fossil fuels through the responsible development of offshore wind technology,” said Governor Janet Mills. “This small-scale research site 30 miles off the coast will become home to innovative technology developed here in Maine. The research project will help establish the best way for our state to embrace the vast economic and environmental benefits of offshore wind. Fundamentally, I believe that offshore wind and Maine’s fishing industry can not only coexist, but can help us build a stronger economy and a brighter, more sustainable future for Maine people.”

As an unprecedented research opportunity for offshore wind, the research site reflects the Mills administration’s commitment to advancing offshore wind responsibly in Federal waters of the Gulf of Maine, which has some of the highest sustained wind speeds in the world and abundant potential to generate clean, renewable energy for Maine people.

The research site also aligns with the trajectory of the emerging offshore wind industry in the U.S., as ambitious clean energy generation targets by the Federal government and many states increase demand for commercial-scale projects in deep Federal waters, where floating platform technology will likely be required.

By addressing fundamental questions about how offshore wind can exist in the Gulf of Maine, the intent of the research array is to advance the development of Maine’s offshore wind economy while informing the responsible growth of floating offshore wind in the United States and beyond.

The application comes after bipartisan support by the Maine Legislature for LD 336, sponsored by Sen. Mark Lawrence, D-York, which declared the research array is in the public interest and authorized the Maine Public Utilities Commission to negotiate a power purchase agreement with the University’s offshore wind development partner, New England Aqua Ventus.

This legislation also established an offshore wind research consortium, which will include members of Maine’s fishing industry, marine scientists, offshore wind industry experts, and others to oversee research priorities for the array.

Harnessing the unequaled wind resources off the coast of Maine is a key tool in meeting the State’s climate goals of moving Maine to using 80 percent renewable energy by 2030, and 100 percent by 2050, to curb harmful greenhouse gas emissions. This effort is of importance in the Gulf of Maine, where surface temperatures are warming faster than nearly every other body of water in the world.

With some estimates forecasting offshore wind as a $1 trillion global market by 2040, responsible development of this industry is a unique economic opportunity for Maine to create good-paying jobs in clean energy fields, maritime careers, manufacturing and fabrication trades, engineering, shipbuilding, and more.

There is no specific timeline required for the application review by BOEM, which is separate process from the State’s work to date, but it is expected to take several years before all permitting is secured and construction could begin.