Monday, 31 August 2020
0
REM
Lawrence Berkeley National Laboratory has released the Wind Energy Technology Data Update: 2020 Edition. The release provides an updated overview of data and trends in land-based wind energy in the U.S., in the form of a briefing slide deck, a data file, and a series of data visualizations. 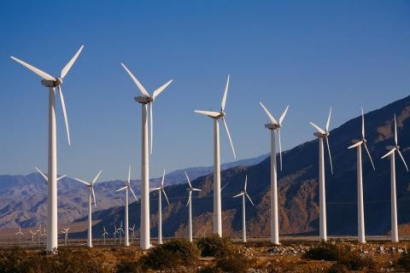 The report shows wind comprises a growing share of the U.S. electricity supply. More than 9 GW of new wind power capacity, representing an investment of $13 billion, was installed in the U.S. in 2019. Wind energy output rose to more than 7% of the entire nation’s electricity supply, more than 10% in fourteen states, and more than 40% in two of those states—Iowa and Kansas. At least 225 GW of wind are seeking transmission interconnection, 5% of which are paired with storage.

Improved plant performance has been driven, in part, by larger turbines mounted on taller towers and featuring longer blades. The area swept by the average wind turbine rotor has more than doubled since 2010, compared to a 42% increase in average turbine capacity and a 13% increase in average hub height. Project applications submitted to the FAA suggest that total turbine height (tower plus blade length) will continue to rise in the years ahead.

After topping out at 7¢/kWh for power purchase agreements (PPAs) executed in 2009, the national average price of wind PPAs has dropped to below 2¢/kWh—though this nationwide average is dominated by projects that hail from the low-priced interior of the country, where the wind resource is strongest. This sub-2¢/kWh average, which is possible in part due to federal tax support, falls below the projected future fuel costs of gas-fired generation. Utility-scale solar PPA prices have also declined precipitously, pressuring wind’s competitive position.

The levelized cost of wind energy, which does not reflect the federal production tax credit, was in the mid-$30/MWh range in 2019, down from the $85-90/MWh range seen a decade ago.

The value of wind in wholesale power markets is affected by the location of wind plants, their hourly output profiles, and how those characteristics correlate with real-time electricity prices and capacity markets. The market value of wind in 2019 was lowest in the Southwest Power Pool and ERCOT (averaging $15/MWh and $16/MWh, respectively) whereas the highest-value market was CAISO (at $37/MWh). Wind energy PPA prices are generally competitive with these value estimates.

For wind projects recently installed in the U.S., domestically manufactured content is highest for nacelle assembly (>90%), towers (65-85%), and blades and hubs (40-70%), but is much lower for most components internal to the nacelle.

Notwithstanding the COVID-19 pandemic, independent analysts forecast continued wind energy growth.  With federal tax incentives still available, various forecasts for the domestic market show expected wind power capacity additions of more than 10 gigawatts in 2020, with some contraction anticipated in the years ahead as those tax incentives are phased out. 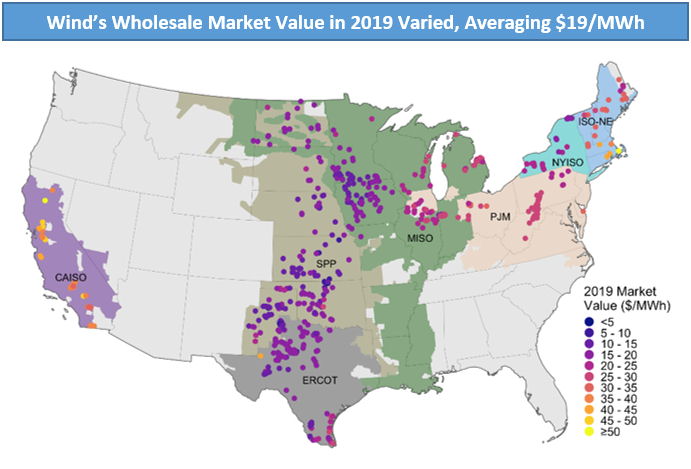