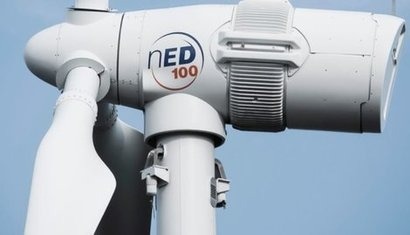 Once installed, two nED100 100 kilowatt turbines will cover the energy needs of the on-site Pump House, providing the port with a means of further reducing its carbon footprint, alongside extensive financial savings and operational benefits. Industrial and agricultural institutions are increasingly relying on medium-scale wind power to support energy-intensive operations. On-site renewables systems provide a reliable energy source for these operations, as well as unlocking multiple alternative revenue streams for institutions looking to diversify income or balance out energy expenditure.

This role will continue to grow as equipment and installation costs fall further and with the success of innovative installations at Norvento’s sites across the UK and Europe. At Shoreham Port, Norvento’s turbines will feed electricity into the Pump House, directly supporting the energy-intensive process of maintaining water levels in the basins of the port, despite changes in the tide. The Pump House requires 475,000 kWh of energy per year on average and the turbines will more than cover this demand, producing an average of 555,000kWh per year.

“Medium-scale wind turbines have demonstrated a wide variety of applications for industrial and agricultural institutions, and are increasingly becoming a cheaper and more flexible energy source than the traditional options” said Ivo Arnús, Director of UK Business Development, Norvento. “As such, institutions like Shoreham Port are employing them to cover energy-intensive operations which would otherwise result in very high energy expenditure. The nED100 turbine has proved itself particularly well-suited for urban installations which require a model with minimal visual and noise impacts.”

Peter Davies, Development Director at Shoreham Port, added that the port is keen to reduce its dependency on fossil fuels and generate green energy that can be used on site. The port is confident that it has chosen the right turbines for the job and that they will become an asset to the port without impacting on the local area.

The versatile nED100 machines will also ensure increased flexibility for these operations by compensating for voltage fluctuations caused during start-up of the pumps. The site has been funded by means of a long-term lease agreement which will see Norvento lease the two harbour-front sites and sell Shoreham Port the energy produced by the turbines at a rate substantially lower than typical retail electricity prices.

Over the 20-year timeline of the deal, Shoreham Port is set to save tens of thousands of pounds in energy costs. Combined with existing rooftop solar panels, the turbines will also help to wean the port away from fossil fuels and support its Eco-port status.

Norvento’s nED100 turbines are particularly well suited to the needs of the port due to their IEC 61400-1 design standard for safety and reliability, as well as their unique low-noise mode, which enables them to operate in the vicinity of homes and local businesses. These factors were instrumental in security planning permission for the project in March 2015.