Wednesday, 25 November 2020
0
REM
The Port of Leith, owned by Forth Ports, is enhancing its position in the offshore renewables market with a seven figure privately funded investment at the port to bring to the market an additional 25 hectares of land linked to over 3km of deepwater quaysides. This investment will see the skyline of the port changed, with the final stages of the demolition of the Imperial Grain Silo being completed. 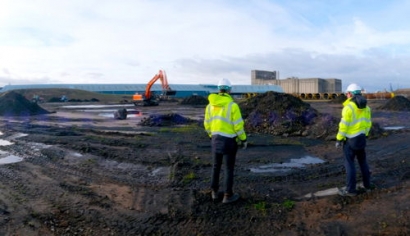 Commenting on the investment and plans, David Webster, Senior Port Manager at Forth Ports, said, “This investment is another example of our commitment to bring large-scale renewables to Scotland. This will allow Leith to build on its current success as well as complement the significant upgrades that are underway in our Dundee facility. The foundation logistics in Leith will be supported by the wind  turbine hub in Dundee, we see this as the future to local content in Scotland that will drive employment.”

The Port has seen an unprecedented surge in activity over the past few years with the energy transition to low carbon becoming a strong influence in the future of Scotland and Leith. The Port of Leith has been able to demonstrate its agility through responding to project needs ranging from utilizing the deep water for the storage of offshore wind farm foundation jackets to significant project work associated with the subsea elements of the development of offshore wind farms.

Shipping and onshore economic activity has been boosted at Scotland’s capital port this year with its key role in supporting EDF Renewables’ and ESB’s major offshore wind farm Neart na Gaoithe(NnG) at various stages of the project. This major Scottish project will supply enough low carbon electricity for around 375,000* homes and has a capacity of c. 450 megawatts (MW) of low carbon energy, will offsetting over 400,000 tonnes of CO2 emissions each year.

Matthias Haag, NnG Project Director, said, “It’s really exciting to see the Port of Leith making such a huge investment in offshore renewables, especially as it will play a key role in the successful delivery of NnG. Since the offshore construction of NnG started in August, the Port of Leith is already Marine Logistics Base for the pile casings. These casings will form part of the foundations on which the project’s 54 turbines and two substations will stand.

“We’ve always said we’re committed to using the Scottish supply chain as much as possible and we’re really pleased to be working with the Port of Leith.”