Thursday, 18 August 2022
0
Robin Whitlock
RES has submitted a planning application to the Scottish Government’s Energy Consents Unit for their nine turbine Sclenteuch Wind Farm, located 3 kilometres southwest of Patna in East Ayrshire, which, if approved, would be capable of generating up to 54 MW of clean, low-cost electricity to meet the annual demand of around 50,000 homes. 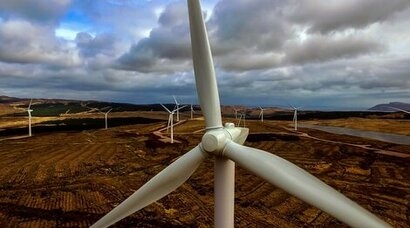 As part of the scheme, RES is also proposing to create a new path connecting with the existing High Keirs track to form a walking and cycling route called ‘Keirs Glen Trail’. This will provide a circular nature trail, with car parking, biodiversity enhancements and information boards.

The local community would also benefit from a vital economic boost through the creation of skilled, sustainable jobs during the construction phase, in particular. The development is predicted to deliver around £2.5 million of inward investment in the form of jobs, employment and the use of local services. In addition, over £0.5 million in business rates will be paid each year to fund vital local services within the community.

RES has taken a two-stage approach to consulting on their plans for the project with public exhibitions held in November 2021 and a subsequent online exhibition and drop-in sessions taking place in March of this year. RES used the valuable insights gathered from stakeholders and the local community back in November – in addition to results of ongoing detailed environmental surveys - to refine the design of the proposed wind farm and present this back to the local community.

RES will deliver a package of community benefits as part of the scheme and has engaged local people to explore ideas for this. The feedback received to date demonstrates that discounting the annual electricity bills of residents living closest to the proposal is the preferred opportunity. The renewable energy company will continue to work with the community to investigate other meaningful forms of local benefit, which were raised during conversations locally.

“At a time when consumer bills are rising it’s vital that new renewable energy projects such as Sclenteuch, that can deliver low-cost electricity to consumers, are supported” said James Cameron, Development Project Manager at RES. “The scheme also presents the opportunity to provide tangible recreational benefits to the local community through the creation of Keirs Glen Trail to the north east of the site, while delivering valuable biodiversity and habitat enhancements.”

In Scotland, RES has developed/or constructed 21 wind farms with a total generation capacity of 597MW.

The Scottish Government has set a legally binding target for reducing greenhouse gas emissions to net zero by 2045 and onshore wind projects like Sclenteuch will play an important role in helping to achieve these targets.