Russian businessmen team up to develop a new wind farm near St. Petersburg

Tuesday, 27 March 2018
0
Robin Whitlock
Alexander Roslyakov, the owner of Onego Shipping, and Igor Bryzgunov, the Chairman of the Russian Association of the Wind Industry, have joined together to create a wind farm in the Volkhov District of the Leningrad Region in 2022-2023 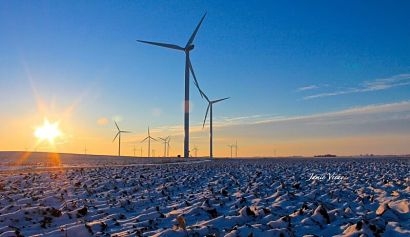 The two private investors intend to establish a new wind power project called ‘Wind Park N1’, with an installed capacity of 69 MW. The facility is expected to be fully commissioned in 2022-23. A building permit is expected before the end of the year, after which the pair intend to try and attract a strategic investor in the project. According to Bryzgunov, the shareholders are considering cooperation with major foreign manufacturers of wind turbines such as ‘Siemens Gamesa’, Vestas or the Ukrainian firm ‘Fuhrlaender Windtechnology’.

Bryzgunov also expects the electricity generated by the wind farm to be sold on the wholesale market. Industry in the Leningrad region could absorb some of the capacity and the shareholders are discussing the possibility of filing an application for a contest for renewable energy projects held by the Association ‘NP Market Council’, a non-profit that generates and sells electricity in wholesale or retail markets serving Russian communities. These projects can compete for a contract with a guaranteed payback period within 15 years and a 12 percent per annum basic rate of return. If ‘Wind Park N1’ is selected, an expensive ‘green tariff’ will be imposed for the sale of electricity. This will in turn attract new investors. The project is also being considered by the Committee for the Fuel and Energy Complex.

A similar project has been announced by the Thermal Power Generating Company, a subsidiary of Gazprom, in the same area, but analysts believe that the two wind projects will not compete with each other since the total generation capacity of the projects is not expected to exceed 0.8 percent of the total amount of power generated in the Northwest region. TGK-1 has yet to confirm its intention to build its wind power plant, although the company has held a tender to determine an appropriate site.

Alexei Kalachev, analyst at the Finam Group, said that except for the hydroelectric power plants inherited from the USSR, which provide one-sixth of the generation of electric power in the Russian Federation, the share of renewable energy sources in Russia is still less than 1 percent. In Russia the energy source is not as important to the energy companies as its net cost and that a major benefit of renewable energy is low operating costs. The Russian Government is currently aiming for a total share of green energy of 4.5 percent by 2020