Tuesday, 31 July 2012
0
REM
Sandia National Laboratories’ wind energy researchers are re-evaluating vertical-axis wind turbines (VAWTs) to help solve some of the problems of generating energy from offshore breezes. Though VAWTs have been around since the earliest days of wind energy research at Sandia and elsewhere, VAWT architecture could transform offshore wind technology, says the lab. 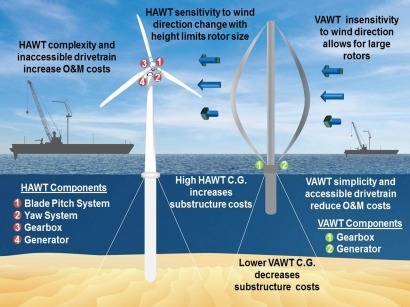 Basing their work on decades of wind energy research and experience, Sandia engineers are creating several concept designs, running those designs through modern modelling software and narrowing those design options down to a single, most-workable design for a VAWT turbine-blade. Results aren’t in, but the early favourite for further testing is the Darrieus design (see inset).

The economics of offshore wind power are different from land-based turbines, due to installation and operational challenges. VAWTs offer three big advantages that could reduce the cost of wind energy: a lower turbine centre of gravity; reduced machine complexity; and better scalability to very large sizes.

Additionally, the drivetrain on a VAWT is at or near the surface, potentially making maintenance easier and less time-consuming. Fewer parts, lower fatigue loads and simpler maintenance all lead to reduced maintenance costs.

Elegant in their simplicity

Sandia is conducting the research under a 2011 Department of Energy (DOE) solicitation for advanced rotor technologies for US offshore wind power generation. The five-year, $4.1 million project began in January of this year.

“VAWTs are elegant in terms of their mechanical simplicity,” said Josh Paquette, one of Sandia’s two principal investigators on the project. “They have fewer parts because they don’t need a control system to point them toward the blowing wind to generate power.”

These characteristics fit the design constraints for offshore wind: the high cost of support structures; the need for simple, reliable designs; and economic scales that demand larger machines than current land-based designs.

Large offshore VAWT blades in excess of 300 meters will cost more to produce than blades for onshore wind turbines. But as the machines and their foundations get bigger — closer to the 10–20 megawatt (MW) scale — turbines and rotors become a much smaller percentage of the overall system cost for offshore turbines, so other benefits of the VAWT architecture could more than offset the increased rotor cost.

However, challenges remain before VAWTs can be used for large-scale offshore power generation.

VAWT blades must also overcome problems with cyclic loading on the drivetrain. Unlike horizontal axis wind turbines (HAWTs), which maintain a steady torque if the wind remains steady, VAWTs have two “pulses” of torque and power for each blade, based on whether the blade is in the upwind or downwind position. This “torque ripple” results in unsteady loading, which can lead to drivetrain fatigue. The project will evaluate new rotor designs that smooth out the amplitude of these torque oscillations without significantly increasing rotor cost.

“Underpinning this research effort will be a tool development effort that will synthesize and enhance existing aerodynamic and structural dynamic codes to create a publicly available aeroelastic design tool for VAWTs,” Barone said.

HAWTS use pitchable blades, which stop the turbine within one or two rotations without damage to the turbine and are based on multiple redundant, fail-safe designs. Barone said new VAWT designs will need robust aerodynamic brakes that are reliable and cost-effective, with a secondary mechanical brake much like on modern-day HAWTs. Unlike HAWT brakes, new VAWT brakes won’t have actively pitching blades, which have their own reliability and maintenance issues.

A Sandia team completes installation in the late 1980s of a vertical axis wind turbine test platform in Bushland, Texas. (Photo by Randy Montoya) Click on the thumbnail for a high-resolution image.

In the 1970s and 1980s, when wind energy research was in its infancy, VAWTs were actively developed as windpower generators. Although strange looking, they had a lot going for them: They were simpler than their horizontal-axis cousins so they tended to be more reliable. For a while, VAWTs held their own against HAWTs. But then wind turbines scaled up.

“HAWTs emerged as the predominant technology for land-based wind over the past 15 years primarily due to advantages in rotor costs at the 1 to 5 megawatt scale,” Paquette said.

In the 1980s, research focused more heavily on HAWT turbines, and many VAWT manufacturers left the business, consigning VAWTs to an “also ran” in the wind energy museum.

But the winds of change have blown VAWTs’ way once more.

Sandia is mining the richness of its wind energy history. Wind researchers who were among the original wind energy engineers are going through decades of Sandia research and compiling the lessons learned, as well as identifying some of the key unknowns described at the end of VAWT research at Sandia in the 1990s.

The first phase of the program will take place over two years and will involve creating several concept designs, running those designs through modern modeling software and narrowing those design options down to a single, most-workable design. During this phase, Paquette, Barone and their colleagues will look at all types of aeroelastic rotor designs, including HVAWTs and V-shaped VAWTs. But the early favorite rotor type is the Darrieus design.

In phase two researchers will build the chosen design over three years, eventually testing it against the extreme conditions that a turbine must endure in an offshore environment. In addition to rotor designs, the project will consider different foundation designs: Early candidates are barge designs, tension-leg platforms and spar buoys. The project partners will work on many elements.

“Ultimately it’s all about the cost of energy. All these decisions need to lead to a design that’s efficient and economically viable,” said Paquette.

Sandia National Laboratories is a multi-program laboratory operated by Sandia Corporation, a wholly owned subsidiary of Lockheed Martin company, for the US Department of Energy’s National Nuclear Security Administration. With main facilities in Albuquerque, N.M., and Livermore, Calif., Sandia has major R&D responsibilities in national security, energy and environmental technologies and economic competitiveness.