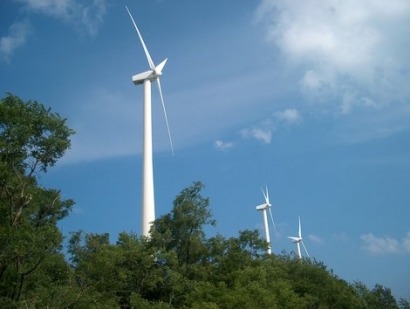 The Harestanes wind farm project has supported more than 150 jobs over the past two years with 60 of those directly from the local community. It will generate enough renewable energy to meet the average electricity demands of over 73,000 homes per year.

The wind farm covers an area of 20 square kilometres in the Forest of Ae which is managed by the Forestry Commission. It consists of 68 turbines and also includes a new operations and maintenance building along with 11 kilometres of tracks and paths which will be open to the public for recreational use. A new 4 kilometre mountain bike trail has also been built on the famous 7 Stanes cycle route.

Alongside job creation, the Harestanes project also stimulated the creation of a new turbine technician course at Dumfries and Galloway College. This allows participants to acquire industry recognised qualifications and assist them on their way to become wind turbine technicians. ScottishPower Renewables has provided funding for the course as well as kit for the students to train on, including an anemometer, which is used to calculate wind speeds, a generator and transformer.

“Harestanes is one of the largest onshore windfarms in Scotland, and it is fantastic to see the project fully completed after a number of years of planning and preparation” said Keith Anderson, CEO of ScottishPower Renewables. “As well as overcoming many hurdles during the planning process, we also had to manage the discovery of unexploded WW2 bombs during construction, and we were delighted to finish the project on schedule. Onshore wind power continues to be a strong contributor to the UK’s economy, and major projects like this support hundreds of jobs. Over the lifetime of the project, we will need highly skilled technicians to operate and maintain the windfarm and millions of pounds will be invested in the local area. We hope to see some of the newly qualified technicians from Dumfries College coming in to the industry and working on projects like this after graduation.”

Mr Anderson added that SPR is looking forward to the wind farm being used recreationally by the public and is hoping to attract walkers, cyclists and joggers. He said that it is important for wind farm projects to interact with visitors and to work with organisations such as the Forestry Commission and local groups.

“The Scottish Government wants to see the right developments in the right places, and Scottish planning policy is clear that the design and location of renewables projects should reflect the scale and character of the landscape, as well as being considered environmentally acceptable” said Fergus Ewing, Scottish Minister for Energy, Enterprise and Tourism. Mr Ewing also stressed that such projects provide considerable benefits with regard to reducing carbon emissions while helping Scotland to reach its target of 100 percent electricity demand from renewable sources.