Tuesday, 18 January 2022
0
Robin Whitlock
The 94 MW Iglesias wind farm in Burgos in the north of Spain will be the first onshore wind farm in Spain to feature SGRE’s 5.X platform turbines, the most powerful wind turbines currently available on the onshore wind market. 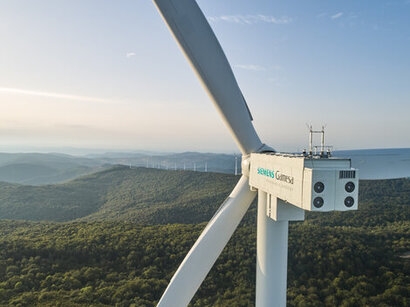 The nacelles for these turbines will be manufactured at the company’s plant in Ágreda and the new project will also boost the activity of Siemens Gamesa's Spanish suppliers, which will be involved in the production of various components, such as the wind turbine towers.

The 94 MW of clean energy that the wind farm will produce will provide electricity to more than 75,000 households, more than half of the entire population of the province of Burgos. In addition, it will help to avoid the emission of 250,000 tonnes of CO2 a year, equivalent to the emissions of around 150,000 vehicles. To achieve this CO2 saving, four million trees would need to be planted.

“Siemens Gamesa has made many firsts in Spain working in partnership with Iberdrola” said Lars Bondo Krogsgaard, Onshore CEO of Siemens Gamesa. “This first is also special as it marks a debut for the Siemens Gamesa 5.X platform in the country, the most powerful turbine in the sector, and that can provide a real boost to the country’s energy transition. We look forward to turning this first wind project using the platform into a success and for many more firsts to come with Iberdrola.”

The contract is yet another for the Siemens Gamesa 5.X platform, which has now signed over 3.6 GW in deals globally since its launch. The company has already signed agreements to install its most powerful turbine in six different countries, including Sweden, Finland, United Kingdom, Germany, Brazil and now Spain.

Technology such as the Siemens Gamesa 5.X will help drive an energy transition in Spain. While the country already has the fifth largest installed capacity of wind energy in the world at over 28 GW, according to the Spanish Wind Energy Association, it has set further ambitious targets. The country aims to meet 42 percent of final energy use from renewables by 2030, compared to 20 percent in 2020, with the stake of renewable energy in the electricity mix rising to 74 percent. The final objective would be to reach 100 percent by 2050. In 2021, wind energy represented the largest source of electricity in Spain, according to the association.

The wind farm is scheduled to be commissioned in early 2023 and the contract includes a service agreement for a period of five years.