Wednesday, 15 April 2015
0
Robin Whitlock
The UK has broken its previous record on installed wind power and is also now the European leader in the offshore wind sector according to research by industry intelligence website GreenMatch. 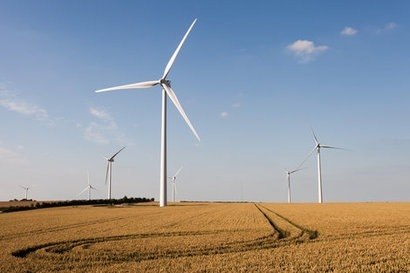 2014 was an exceptional year for wind energy, but recent statistics from 2015 are indicating an annual market growth of 44 percent and record installations of more than 51 GW of wind energy. The results were obtained from a study compiled by the Global Wind Energy Council. They show that China will continue their present lead with 45 percent of the total annual market, while Europe will face a slight downturn. Africa and Latin America will continue as emerging markets.

In the UK, the wind power sector not only remains on track to secure 15 percent of the country’s total energy from renewable energy sources by 2020, it has also beaten its previous record set in 2013 with 14 percent of all UK electricity generated by wind power.

However, as the UK’s deployment of wind energy has grown, the discussion over new projects has increased at local and political level. This has in turn led to a negative effect on investments due to a changing financial regime and the resultant uncertainty for investors. It is likely that investment levels in UK wind will struggle for the remainder of the year although the offshore wind manufacturing facilities constructed by Siemens and MHI Vestas Offshore Wind in the UK will most likely be ready before the end of 2015.

Although Denmark has led wind energy installation for several years, the issue has assumed centre stage in the UK and Germany, accompanied by the desire to move away from the traditional feed-in tariff structure towards a more market-based approach. Currently, wind generation in the UK is supported either by financial support from the Renewables Obligation (RO) scheme for projects larger than 5 MW, or the feed-in tariff for smaller projects. The latter system is directed towards domestic, business or agricultural use with the rate of support measured according to technology and size.

The study also shows that the UK has the largest offshore wind capacity in Europe, with 55 percent of all installations, thereby taking the throne from the previous market leaders, Denmark (15.8 percent) and Germany (13 percent). Belgium is fourth on the list, followed by The Netherlands, Sweden and Finland. Out of 17 offshore wind farms, 10 of them were installed in UK waters. Five of these, Methild Demo, West of Suddon Sands, Gwynt y Môr, Westernmost Rough and Humber Gateway, are responsible for a total annual capacity of 813 MW with 219 turbines installed.