Monday, 05 September 2016
0
Robin Whitlock
The American Wind Energy Association (AWEA) has released figures showing that the rapid rise of American wind power has been accompanied by increased support among US voters. 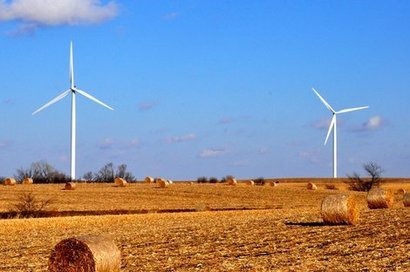 The US has achieved a milestone of 75 GW of installed wind power capacity according to AWEA, triple that achieved in 2008. This represents enough electricity to supply 20 million average American homes.

National polling data shows that wind energy is popular among a wide majority of American of all political parties with 85 percent of voters in Texas supporting the technology. The state is now home to a quarter of total American installed wind power. In Iowa, which maintains the current US record of 35 percent electricity generation from wind, the support for wind is even higher at 91 percent.

“Candidates running for office on both sides of the aisle in this important election year should take note: The more wind farms we build, the stronger support from US voters grows” said Tom Kiernan, CEO of AWEA. “As wind power has more than tripled over the last eight years, so have its economic and environmental benefits. Wind technician is the fastest growing job in the US, and the billions of dollars of investment in local economies have revitalized many rural communities.”

John Kostyack, Executive Director of the Wind Energy Foundation, added that highly favourable poll results in Iowa and Texas are particularly compelling, showing that the more wind power is installed the greater the demand for additional development. He stated that this should come as no surprise given that farmers, ranchers and communities in states like these have long enjoyed the economic benefits of wind power development. This in turn has led county representatives in Iowa’s Third District to call more wind farms to be built in their community.

There are now 75,221 megawatts (MW) of wind power capacity installed in the US, up from 25,065 MW at the end of 2008. These turbines produce as much electricity as 17 typical nuclear plants or 65 coal plants, equivalent to the total electricity consumption for six states combined: Iowa, Kansas, Oklahoma, Nebraska, North Dakota and South Dakota. The Department of Energy’s Wind Vision report says wind generation could double by 2020 and double again by 2030.

Polls in recent months suggest Americans’ support for wind power is rising in tandem with the growth of the industry. Results show 70 percent of registered voters nationally have a favourable impression of wind energy, according to a new mixed-question omnibus poll of over 1,000 respondents conducted for AWEA from August 10-14 by market and survey research firm SSRS. That includes over 60 percent of Republicans and Independents.

Further results suggest that the more Americans get to know wind power, the more they like it.

A July poll of likely voters in Iowa’s Third Congressional District conducted by WPA Opinion Research for the advocacy group American Wind Action, found 91 percent of respondents support wind energy. Iowa’s Third District ranks in the top 20 U.S. Congressional districts for the most wind capacity, and is home to the tallest operating U.S. wind turbine in the country.

Manufacturing is another component of the wind power success story, creating quality jobs and spinoff benefits for communities across the country. TPI Composites, Inc. helped revitalize Newton, Iowa, when it opened a wind turbine blade factory after a nearby Maytag washing machine plant transferred its jobs overseas. The Maytag plant itself is now occupied by another wind manufacturer, Trinity Structural Towers.

The rapid growth and falling costs of wind energy means business is booming for other companies manufacturing parts for wind turbines, too. A Siemens wind turbine blade factory in Madison, Iowa, puts hundreds of people to work – making it one of the biggest employers in Lee County. Across the US, over 500 factories employ more than 21,000 workers supplying the wind industry. Including jobs in operations and maintenance, harnessing American wind energy is a 50-state enterprise that supports 88,000 jobs in total. Meeting demand for America’s fastest growing occupation, “wind turbine technician,” calls for a new generation of workers.

Completed wind projects helping to push the industry past the 75 GW milestone include the 154-MW Adams wind farm in Iowa, the 200-MW Los Vientos IV wind farm in Texas, and the 200-MW Odell wind farm in Minnesota. There are currently 18 GW of wind capacity under construction or in advanced stages of development across the US.

Wind power’s rise corresponds with technological advancements and better siting practices that have improved turbine efficiency and cost-effectiveness. Wind is now the lowest-cost solution for producing electricity and cutting carbon pollution in many parts of the country. Utilities and Fortune 500 companies continue to show strong demand for wind power, with dozens of new purchases announced this year.