Tuesday, 12 June 2012
0
Mike McGovern
Just weeks after a fire in the nacelle of a Vestas wind turbine in Germany caused by an electric arc, the Danish wind turbine manufacturer has had to put out another fire in a nacelle, this time on the Spanish Casa del Aire wind farm in El Bonillo (Albacete). On initial inspection, the company denied that the two cases were related. 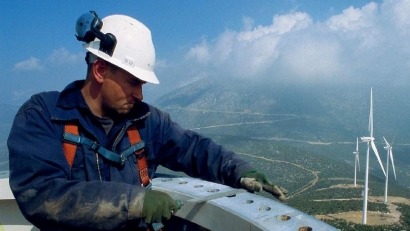 While the machine involved in Germany was a V112-3.0 MW, the El Bonillo incident affected a V90-2 MW turbine. The electric arc occurred "during servicing," Vestas told Renewable Energy Magazine. "An employee suffered burns to his face and hands and was immediately taken to hospital. He is now at home recovering and improving satisfactorily; he wants to return to work soon."

According to the company, "the situation was under control at all times [and] a fire-fighting team extinguished the flames in a matter of hours”. Local sources say the fire had spread to surrounding scrub in an area susceptible to forest fires. However, Vestas insists that it was able to stop the fire from spreading. It also says that the other 24 machines on the wind farm continued to operate "safely" during the entire fire-fighting operation.

" Vestas is currently conducting an investigation into the cause of the electric arc," said the company last week. Once the reason for this is clarified, "Vestas will inform its client and proceed with the appropriate action". The client, Renovalia, declined to comment on the incident, claiming that it is the full responsibility of Vestas, as turbine supplier and operating and maintenance (O & M) service provider.

"Given the information available, the Casa del Aire incident is an isolated case with no connection to the fire involving the V112 in Germany or any other incident concerning a Vestas wind turbine," insists the company. The Danish manufacturer performed part of its investigation in Germany before taking down the charred nacelle two weeks later, specifically on 28 May. This investigation is now on-going with the pieces on the ground.

Although the April fire at the Gross Eilstorf wind farm also involved an electric arc, Vestas rejects any link with the incident in Spain. In the German incident, the arc stemmed from the harmonics filter cabinet, where there was a poor connection in part of the electrical circuit. Following its investigation, Vestas concluded that the solution to the problem lies in using a different washer for this electrical connection. On the other hand, the arc leading to the Bonillo fie came from the control cabinet, explains Vestas.

The Danish company stresses that it has delivered more than 5,150 units of the V90-1.8/2.0 MW turbine worldwide – almost half (specifically 2,170) in Spain – and that "none of the V90-1.8/2.0 MW turbines installed in Spain has experienced a similar incident to the Casa del Aire wind farm". In fact, Vestas insists, "to date, and based on information available, we are not aware of any indication that links the Casa del Aire incident to a design flaw or problem in the V90-2.0 series".

For his part, the Mayor of El Bonilla, Juan Gil, commented shortly after the fire that: "clearly, El Bonilla’s only concern is that this incident involved an occupational accident". Moreover, Gil said: "the company responsible [Vestas] has sent me its reassurances, which it did not have to, given that it is a responsible company with an exemplary record".

Gil also emphasised what he defines as "maximum guarantees in terms of fire prevention and extinguishing in place at both a municipal and district level". He added that "from all angles, I want to show my support to companies in this sector in El Bonillo". These companies have set up seven wind farms totalling approximately 100 MW in the municipality, according to local sources.