Friday, 22 January 2021
1
Robin Whitlock
Wind power will provide the backbone to the electricity sector’s transformation over the coming decade, according to a new report from Rethink Energy, with the technology paving the way for all zero-carbon technologies, accounting for two-thirds of global power production by 2030. 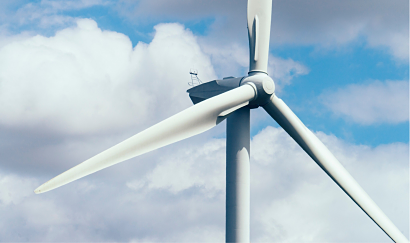 In the report entitled Wind accelerates past nuclear and hydro in post covid power markets, and it makes it clear that all previous forecasts have under-estimated the appeal of wind by some margin.

This has been triggered by the recent surge in national renewable pledges, the election of a Green US President and plummeting technology costs. With an increasingly attractive investment environment, wind power generation will overtake hydropower and nuclear through the coming decade, in the process thinning out fossil fuels contribution.

From an installed capacity of 756 GW at the end of 2020, the decade will see the wind power market grow three-fold by 2030, when projects in operation will amount to 2,126 GW.

The report points to China as the largest proponent of this growth, accounting for 36 percent of additions over the next decade, reaching 780 GW of cumulative capacity by 2030. The USA represents the second largest market, accounting for 15 percent ahead of India in third place, with 5 percent of the decade’s installations.

China will also lead in the emerging offshore wind sector, overtaking the UK as the world’s largest market at the end of 2020. Reaching 248 GW of global capacity by 2030, up from just 35 GW today, offshore wind installations will grow to account for 12% of total wind additions. This will be bolstered significantly as markets emerge in the USA and Asia Pacific over the coming years, as well as the dawn of commercial floating wind in the mid-2020s.

As technology advances with larger and more efficient turbines and as curtailment is reduced, annual generation from the sector will surpass 7,300 TWh per year in 2030, satisfying nearly 22 percent of the projected global electricity demand by this time.

This five-fold growth in generation, however, will only entail a 125 percent increase in annual investment. Through the decade, the total spend on wind installations is set to reach $1.7 trillion, accounting for less than 0.1 percent of global GDP, but preventing over 10 percent of today’s CO2 emissions.

Through a period of low interest rates following Covid-19, such spending provides an optimum opportunity for governments to jump-start their economies after pandemic-enforced shutdowns. The anticipated build out of wind power capacity is set to create 4.1 million employment opportunities across the globe.

The report’s lead author Harry Morgan praises the sectors robustness through the pandemic stating that “while Covid-19 has weighed down the growth of many sectors of the economy, wind power is one where disruption can be solely noted in the physical disruption of project installations. The vast majority of governments across the world have been accommodating of this, meaning that the global pipeline has only been dented in the sense that a few projects will be installed marginally later than expected.”

The pandemic will only be partially responsible for a small downturn in installations through 2021 and 2022, which will be mainly driven by the global shift towards subsidy free auctions. The surge of installations seen in the US in Q4 2021, ahead of the Production Tax Credit phase out in the US (which has now been extended by a year), a surge of 17.4 GW of new capacity was installed – a quarterly level which is unlikely to be repeated for many years. The subsequent slowdown in activity is likely to be replicated in major markets in both China and Europe, in the next two years, while the same happens for offshore wind around 2023.

Tags: Wind ,China ,Hydro ,Nuclear ,Offshore ,Electricity ,CO2 ,Employment ,Europe ,Fuel ,India ,Carbón
Add a comment
Donald Cox
Jerry Link Credit Group helped me to remove eviction, foreclosure, bankruptcy and lien from my credit report; am happy to say they are the best at the moment. They boosted my credit score from 440 to 793 excellent score and all these were achieved in less than 8 days. They are the best among all. They’re secured, fast with affordable price, contact via jerrylinkgroup at gmail dot Com or call 916 888 4118 for all kinds of credit repair.
storage