Thursday, 06 July 2017
0
Al Maiorino
The State of Wyoming produces more coal than any other state in the nation, but if one global wind turbine manufacturer gets its wish, the state may just be forced to turn its attention to wind energy. 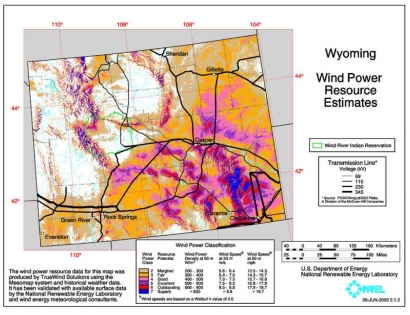 According to a New York Times article written by Diane Cardwell, Goldwind, headquartered in China, is making an attempt to attract coal miners in Wyoming into the wind industry. The program called “Goldwind Works” will offer free training for those interested in becoming a wind farm technician. The program aims to target coal miners who are out of work and others from different industries across the state.

What will become the largest onshore wind farm in North America is to be built in Wyoming. The Chokecherry and Sierra Madre Wind Energy Project by Power Company of Wyoming will boast 1,000 wind turbines in Carbon County, Wyoming. Goldwind is preparing to supply around 850 of those wind turbines and is seeking at least 200 workers to build and maintain them. According to Justin Worland from Time Magazine, the project is expected to create at least 1,000 new local jobs.

Despite the enormous amount of renewable energy potential in the state, Wyoming stands alone as the only state in the country with a wind production tax. In this way, legislation in the state tends to favor fossil fuels over renewable energy, and renewable energy produced by the state is very limited. As it stands, it is likely that the energy produced by the wind farm in Wyoming, which will power up to 1 million homes, will be transported to California through a 730-mile long power line. That amount of energy would power nearly every home in Wyoming, Idaho and North Dakota combined.

In 2015, Wyoming received nearly 88 percent of its electricity from burning coal. The state also produces around 40 percent of all the coal in the United States. As with most scenarios, the people and legislators in Wyoming would need something that sweeps them off of their feet in order to be willing to change what has worked for them for so long, and that something may just be wind jobs—wind jobs that are cleaner, healthier, more lucrative, and are rising at a projected growth of 108 percent over ten years according to the Bureau of Labor Statistics.

If Goldwind is able to gauge enough interest from those in the coal industry and successfully transform hundreds of coal miners into wind farm technicians while simultaneously creating hundreds of new jobs, it could open the door for similar projects in the state. As more jobs are created and as the quality of life continues to improve, legislators in Wyoming and those opposed to renewables may eventually become more open to the benefits of wind energy.

A renewable energy project in Wyoming is likely to face significantly more opposition than it would in other places around the country because of the state’s influence in the coal industry. However, wind farm developers, investors, and others involved in these projects can still gain public support using grassroots and digital campaigns. Social media platforms such as Facebook and Twitter have grown into powerful campaigning tools due to the abundance of information being consumed on those sites daily and also due to their cost efficiency. News, updates, and information regarding projects or project proposals can be shared with the public instantly and generate significant traffic and feedback in a very short amount of time.

In addition to utilizing social media platforms, an effective digital campaign will also include a website dedicated to a specific project or proposal. This website should include a link that allows people to submit letters of support directly to public officials and elected leaders as well as fact sheets, and any other resources that may help gain support. The website should also be used as an additional platform to dispel rumors, update residents, and disseminate new information.

Another important and effective aspect of grassroots campaigning is stakeholder relations. Contacting stakeholder groups both locally and statewide to coordinate grassroots efforts can amplify messaging through newsletters, email blasts, presentations to the organization’s members, and state house days to petition the legislature. Coordinating a call to action with stakeholders, such as neighborhood groups, environmental groups or chambers of commerce can greatly enhance support in a meaningful way.

If the Wyoming wind projects currently under development generate the positive economic impact analysts are predicting, the state may have to reassess its wind production tax. In this scenario, it is important for companies and investors to utilize the aforementioned tactics in order to gain significant public support, and in the case of Wyoming, to sway legislators from imposing legislation that aims to penalize or prohibit renewable energy projects.

Wyoming could have a transformative effect on the wind industry in the United States and by creating greater fossil fuel independence while creating thousands of new jobs in an energy sector that is cleaner, healthier and pays more. Providing the people of Wyoming with the necessary information and developing a large support group for renewable projects in the state could lead to legislators opening their doors for more renewable projects as well as keeping the energy generated by those projects in the State of Wyoming.