Thursday, 18 March 2021
0
REM
In the Walloon region of Belgium, the 500th reference plant for biogas upgrading using SEPURAN® Green membranes from Evonik is under construction. The specialty chemicals company is celebrating another milestone in its history as a technology provider for membrane-based gas separation. Since the product was launched in 2011, Evonik has worked with selected partners to develop its membrane technology into a new quality standard in biogas upgrading. 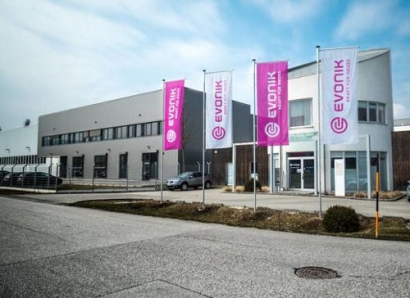 The anniversary plant is a biogas project of the French plant manufacturer Prodeval on behalf of the Belgian company Biométhane du bois d'Arnelle. In it, 55,000 metric tons of organic substrate, one-third of which is renewable raw materials, one-third by-products of food production, and one-third slurry and manure from livestock farming, are used annually to produce biogas. In the first instance, this produces 1,400 Nm³/h biogas. Two-thirds of this is upgraded to high-purity biomethane using SEPURAN® Green membranes from Evonik and fed into the local natural gas grid as a climate-friendly energy source-with the aim of gradually defossilizing the energy mix. One third of the biogas produced is used for on-site generation of electricity.

"We have been relying on SEPURAN Green technology for years. In the Wallonia project, we interconnect the membranes using Evonik's patented 3-stage process, which enables highly efficient production of biomethane," says Sébastien Paolozzi, CEO at Prodeval. "In terms of plant construction, the membrane technology convinces with its flexibility, scalability, ease of handling, as well as plant availability, which together ensure on-time project implementation of all plant sizes and capacities, as well as economical operation."

In the future, biogas production in the Walloon region of Belgium will be doubled in stages. The purified biomethane will be made available to the transport sector via the local filling station network as a climate-friendly fuel, thus reducing local greenhouse gas emissions caused by transport.

"With Evonik's innovative power, we have shaped a global technology leader for membrane-based gas separation in less than ten years and had a decisive impact on the global biogas market," emphasizes Dr. Goetz Baumgarten, head of the Membranes Innovation Growth Field at Evonik. "In close cooperation with our partners such as Envitec Biogas, Tecno Project Industriale, Hitachi Zosen Inova, Bright Biomethane, and Prodeval, we are setting new standards in terms of plant efficiency and methane yield. We have established our membrane technology as the new quality standard for biogas upgrading."

Biomethane is an important building block in the renewable energy mix, alongside solar and wind technology. For years, Europe, with France as the pioneer, has played a leading role in biogas production on an international scale. In the meantime, many other European countries such as Italy, Belgium or the Netherlands, but also the large economies of the USA and China, are relying on this climate-friendly energy source.

Biogas is produced by the fermentation of biomass - an organic substance, for example, from waste such as liquid manure and sewage sludge or from renewable raw materials. The particularly selective SEPURAN Green hollow-fiber membranes from Evonik easily and efficiently upgrade raw biogas, which consists of the energy carrier biomethane plus carbon dioxide, into high-purity biomethane. The climate-friendly energy source can consequently be used to generate electricity and heat or used as a fuel. The membranes are made of a high-performance polymer specially developed by Evonik that is highly resistant to pressure and temperature.

Compared with other biogas upgrading processes such as pressurized water scrubbing, pressure swing adsorption, or amine scrubbing, Evonik's membrane technology has significant advantages: It requires comparatively little energy and does not need any auxiliary materials or chemicals. No waste or wastewater is produced that would otherwise have to be treated and disposed of.

SEPURAN Green membranes are produced at Evonik's site in Schörfling, Austria. The base material - the high-performance polymer - is produced in neighboring Lenzing.