Wednesday, 07 November 2012
0
REM
Engineering researchers at the University of Michigan have come up with a way to "pressure-cook" algae for as little as a minute and transform an unprecedented 65 percent of the green slime into biocrude. 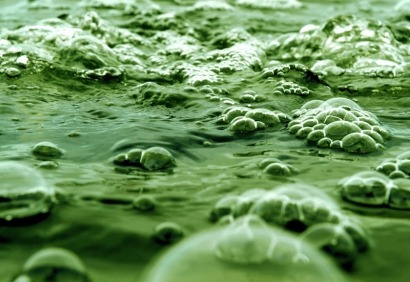 "We're trying to mimic the process in nature that forms crude oil with marine organisms," said Phil Savage, an Arthur F. Thurnau professor and a professor of chemical engineering at the University of Michigan.

The findings were presented 1 November at the 2012 American Institute of Chemical Engineers Annual Meeting in Pittsburgh.

Savage's ocean-going organism of choice is the green marine micro-alga of the genus Nannochloropsis.

To make their one-minute biocrude, Savage and Julia Faeth, a doctoral student in Savage's lab, filled a steel pipe connector with 1.5 milliliters of wet algae, capped it and plunged it into 1,100-degree Fahrenheit sand. The small volume ensured that the algae was heated through, but with only a minute to warm up, the algae's temperature should have just grazed the 550-degree mark before the team pulled the reactor back out.

Previously, Savage and his team heated the algae for times ranging from 10 to 90 minutes. They saw their best results, with about half of the algae converted to biocrude, after treating it for 10 to 40 minutes at 570 degrees.

Why are the one-minute results so much better? Savage and Faeth won't be sure until they have done more experiments, but they have some ideas.

"My guess is that the reactions that produce biocrude are actually must faster than previously thought," Savage said.

Faeth suggests that the fast heating might boost the biocrude by keeping unwanted reactions at bay.

"For example, the biocrude might decompose into substances that dissolve in water, and the fast heating rates might discourage that reaction," Faeth said.

The team points out that shorter reaction times mean that the reactors don't have to be as large.

"By reducing the reactor volume, the cost of building a biocrude production plant also decreases," Faeth said, though both she and Savage cautioned that they couldn't say for sure whether the new method is faster and cheaper until the process is further developed.

Current commercial makers of algae-based fuel first dry the algae and then extract the natural oil. But at over $20 per gallon, this fuel is a long way from the gas pump.

"Companies know that that approach is not economical, so they are looking at approaches for using wet algae, as are we," Savage said.

One of the advantages of the wet method is that it doesn't just extract the existing fat from the algae—it also breaks down proteins and carbohydrates. The minute method did this so successfully that the oil contained about 90 percent of the energy in the original algae.

"That result is near the upper bound of what is possible," Savage said.

Before biocrude can be fed into the existing refinery system for petroleum, it needs pre-refining to get rid of the extra oxygen and nitrogen atoms that abound in living things. The Savage lab also is developing better methods for this leg of biofuel production, breaking the record with a biocrude that was 97 percent carbon and hydrogen earlier this year. A paper on this work is currently under review.

Once producing biofuel from algae is economical, researchers estimate that an area the size of New Mexico could provide enough oil to match current U.S. petroleum consumption. And, unlike corn produced for ethanol—which already accounts for half that area—the algae won't need to occupy good farmland, thriving in brackish ponds instead.

The research, "The Effects of Heating Rate and Reaction Time on Hydrothermal Liquefaction of Microalgae," was funded by the Emerging Frontiers in Research and Innovation program of the National Science Foundation. The university is pursuing patent protection for the intellectual property, and is seeking commercialization partners to help bring the technology to market.