Friday, 12 November 2021
0
Robin Whitlock
Lingering misconceptions have plagued electric vehicles ever since their introduction to the mass market, so with a light-hearted touch Audi UK has teamed up with leading comic and impressionist Rory Bremner to debunk them once and for all in a new video series. 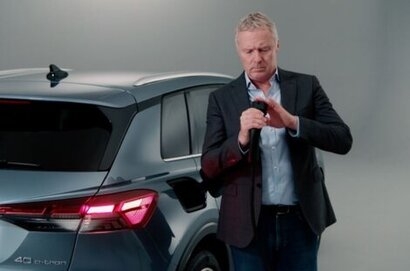 In the short series of myth-busting films, Rory points out, for example, that as well as being cheaper to run the all-new Audi Q4 e-tron is actually over £4,000 cheaper to buy than an equivalent, conventionally-powered Q5. As well as highlighting the advantages EVs bring when it comes to running costs, Rory will also touch on the Q4 Sportback e-tron 40 Sport’s driving range of up to 323 miles, which is a significant 38 times the distance of 8.4 miles driven in an average single journey in the UK.

Audi is already making considerable headway with its range-wide electrification programme, which began with the world premiere of the all-electric Audi e-tron SUV in September 2018, and is now the biggest manufacturer of electric vehicles among the three German premium brands. Due for introduction during 2021 are the new e-tron S, e-tron S Sportback, Q4 e-tron and e-tron GT sports car variants. By 2025, Audi will offer more than 20 models with all-electric drive in the most important markets worldwide and achieve roughly 40 per cent of its sales with electrified variants.

November 12th – Why do EVs cost so much more?

November 15th – Can you drive an EV through a carwash?

November 19th - Isn’t it expensive to service an EV?

November 26th - Are there enough public chargers? What if I need to top up on the move?

Significant growth in deliveries of all-electric Audi models justify the company’s clear move towards e-mobility: by the end of September, Audi had supplied 52,774 all-electric vehicles to customers globally and therefore achieved an increase of 51.4 percent compared to the same period in the previous year (2020: 34,850). As early as 2026, new models launched to the market by Audi will be all-electric exclusively. In 2033 production of the last models with internal combustion engines will cease.