Thursday, 31 May 2018
0
Robin Whitlock
Dandelion, a spinoff from the X laboratory operated by Google parent company Alphabet, has launched the Dandelion Air, a smart, all-in-one home heating and air conditioning system that uses geothermal energy as a heat source. 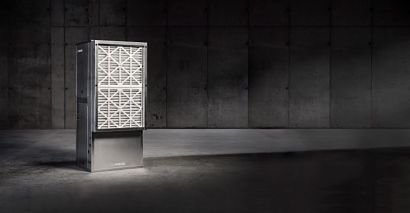 Dandelion claims that the new system is over four times more efficient that any furnace on the market and nearly twice as efficient as a conventional air conditioning system. It is being sold as part of a complete Dandelion home geothermal system for about $20,000, half the cost of traditional geothermal installations, and the company is also offering no-money-down loans, and payments starting at $135 per month over a 20-year term. The company believes that a typical homeowner switching from heating oil to the Dandelion Air could save around 20 percent annually on heating and cooling costs.

The complete system includes installation of underground pipes, a buffer tank for hot water, a Nest Learning Thermostat, and a smart monitoring system. It’s life expectancy is thought to be in excess of twenty years.

Dandelion worked with heat pump manufacturer AAON to develop the system. AAON has supplied water-source heat pumps to tens of thousands of buildings in the US over the years and employs over 2,000 people. Its headquarters are in Tulsa, Oklahoma.

“We’re thrilled to partner with AAON on the Dandelion Air,” said James Quazi, Co-Founder & Chief Technology Officer of Dandelion. “AAON uses state-of-the-art automation technology for precise, time-efficient production of each unit. Together, we will continue to drive up quality and drive down costs of home geothermal heating and cooling.”