GEA highlights US leadership in geothermal market… but for how long?

Thursday, 31 May 2012
0
REM
Last week, more than 250 geothermal industry and policy leaders gathered in Washington D.C. for the International Geothermal Energy Showcase 2012. While the event served to highlight the US’s leadership, unpredictable government policy there has slowed growth, with other countries such as Indonesia faring better. 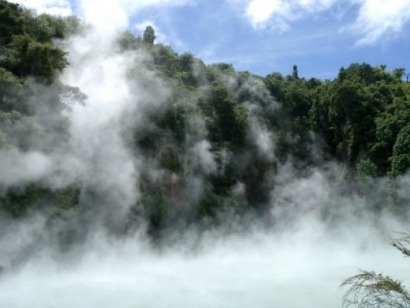 Discussion during last week’s International Geothermal Energy Showcase 2012 focused on the international geothermal market, and noted that many countries around the world are “open for business.” Representatives from more than 27 countries attended the conference to discuss projects in development, market potential, government policies and global opportunities for US companies. Sen. Jeff Bingaman (D-NM) provided the keynote address.

In conjunction with the Showcase, the Geothermal Energy Association (GEA) released an International Market Overview that found global geothermal growth can be attributed to a number of factors, including economic growth, the electrification of low-income and rural communities, new technology, increased energy security concerns and favourable national policies.

Nicaragua and Indonesia have both benefited from favourable policy to become strong geothermal markets. However, unpredictable government policy has slowed growth, particularly in the United States.

During his keynote address, Sen. Bingaman remarked: “We need to develop clean energy technologies for the economic benefits that their development will create here at home. As the developing world increases its appetite for energy in the coming decades, there will be a multi-trillion dollar market for clean energy technology. The only losers in the clean energy race will be those who do not compete. Unfortunately, although the US remains one of the greatest sources of innovation in the world, it is not clear if we will reap the benefits of that innovation or even that we will retain the advantage we have over others in that innovation, as our competitors are making a compelling case to investors and entrepreneurs that it is simply good business to develop there, rather than develop here.”

“The United States has been the pioneer in geothermal energy, and many of our member companies who participated in the International Showcase today are exporting their products overseas. In fact, geothermal is one of only two American renewables that exports more than it imports,” said GEA Executive Director Karl Gawell. “But now the United States is lagging behind the explosive growth in the international market, credited to favourable national policies. It is critical that US policymakers act immediately to keep the United States competitive with the rest of the world.”

Many top US manufacturers, who export a majority of their products and services overseas, also attended the event.

“One of the best aspects geothermal has to offer is that it is very exportable,” remarked Halley Dickey, Director Geothermal Business Development, TAS Energy, headquartered in Houston, Tex. “We’re exporting modular systems to companies around the world, we have three projects in Turkey, and we’re exporting services and expertise as well. We build the entire plant here in the US and export it abroad.” TAS Energy was the winner of the 2011 GEA Honours award for Technological Advancement, and has geothermal projects on six continents; recent projects are in Oregon, California, Nevada and overseas, including Turkey.

Ernesto Martinez Tiffer, President of the National Electric Company of Nicaragua offered another example of US company leadership by Ram Power, based in Reno, which this year brought online a geothermal project in Nicaragua, and also has projects in California, Nevada and Canada. “Right now the policy of the [Nicaraguan] government is wide open to develop geothermal energy. In Central America, Nicaragua has the largest geothermal potential. We started developing geothermal in 1983. When we ran into problems, Ram Power came in and solved the problem.”

“ElectraTherm’s business is approximately 80% export, because of favorable policies, such as feed-in tariffs in Europe,” said ElectraTherm CEO John Fox. He continued on to discuss ElectraTherm’s recent co-production project in Mississippi: “ElectraTherm’s Mississippi project was put online in 48 hours, and we knew the ROI to be 7 to 8 years. Therefore, while we are proving our technology in the US, we face challenging economics due to lower electric rates and limited policy support. ElectraTherm will target Europe, where the economics are especially attractive and policy support is sizable.”