Friday, 08 October 2021
0
REM
Anglesey can become a UK leader in hydrogen energy technology, cleaning up the transport sector and creating high quality jobs across North Wales, according to a leading Welsh economic expert. 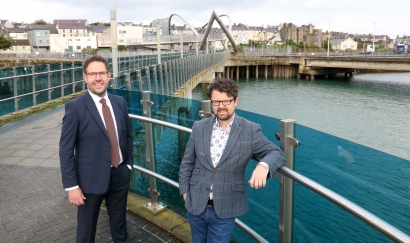 This comes as motorists across the country struggle with chaos at petrol stations caused by a shortage of HGV delivery drivers.

This follows UK Government Business Secretary Kwasi Kwarteng’s claim that the fuel could provide a third of the country’s energy as it bids to reach net zero emissions.

But the UK is already playing catch-up with rivals in Europe and further afield and needs to get up to speed quickly, says economist Dr. Edward Jones, of Bangor University.

Jones, from Bangor University’s Business School, said, “The UK Government made £4.8 million available to develop hydrogen power in North West Wales and that will help social enterprise Menter Môn  develop the technology in the region and also support the economy.”

He believes that North Wales has the infrastructure to make it the UK’s hydrogen capital but added, “China, EU nations, and the USA see hydrogen as the rock star of new energies and are busy establishing a hydrogen economy.

“We need to get our acts together and we need the governments in Cardiff and Westminster to really get behind green hydrogen and upskill people to work with it.

“Certainly, hydrogen comes with unique challenges. The gas is bulky, requires expensive specialist equipment that can be costly to maintain, and few people have experience of working with it.

“But costs are falling due to competition between countries in hydrogen technology.  This was the case with solar panels, where the associated costs plummeted as soon as its usage scaled-up.

“This is an exciting field and North Wales can be at the centre of it.  The technology doesn’t only tackle climate change, it provides lots of high quality, well-paid jobs.

“We have the potential to use the expertise at M-SParc on Anglesey as well and the infrastructure to link in with the National Grid.

“Wales can become a UK hub for this exciting new power source with other hydrogen projects ongoing on Deeside in Flintshire and at Milford Haven in Pembrokeshire.

“Only green hydrogen made with renewables is considered completely sustainable. What makes Anglesey important is that we have here the potential link with other renewable projects in the region, such as the tidal potential of the Morlais project at Holyhead which Menter Môn is also involved with.”

Menter Môn has been working with a range of stakeholders over the last two years to develop the Holyhead Hydrogen Hub.  These include Ynys Môn County Council, Stena, Bangor University and Grwp Llandrillo Menai, as well as the Wales and UK Governments.

Menter Môn Managing Director Dafydd Gruffydd explained, “In addition to making a contribution to Net Zero, our motivation is to maximise the local economic benefit from this project.  We believe this is best achieved via local ownership, as we are pursuing with the Morlais project.”

Hydrogen is created by passing an electrical current through water to separate hydrogen and oxygen, leaving clean water as the only by-product. A fuel cell allows the process to be reversed so hydrogen can then produce electricity.

The UK has introduced a ban on new petrol and diesel cars from 2030 and hydrogen-fuelled cars could become a common site on North Wales roads in the not too distant future.

Jones believes hydrogen could also hold the key to powering transport in future through a Welsh invention from the 19th century (the hydrogen fuel cell was developed in Swansea by William Grove in 1842).

Current electric car batteries are made using lithium and cobalt, chemicals which are difficult to extract and have major environmental hazards associated with them and are almost impossible to recycle.

Jones added, “Hydrogen fuel cells provide a possible solution to the challenge of needing to transform the transportation sector and because it is the most common  element on earth supply is not a problem.

“A vehicle powered by a hydrogen fuel cell could have a range of up to 500 miles, recharge in 15 minutes and instead of carbon monoxide produce only steam.”

“In North West Wales we also have enough potential for green energy to be able to manufacture hydrogen through renewable energy.

“Current costs are high which would require subsidies to lose the gap on existing fuels, but as production ramps up then costs will tumble.

“The world is uniting to fight climate change and North Wales is playing a vital part in keeping the planet on course for achieving net-zero emissions by 2050.”

Caption: An energy bridge to the future – Anglesey can be the UK’s hydrogen hub according to Bangor University economist Dr. Edward Jones, left, and Menter Môn  Chief Executive Dafydd Gruffydd.