Advancing the solar revolution: An interview with Assaad Razzouk

Friday, 04 September 2015
1
Robin Whitlock
In an article for The Huffington Post this week, the Group Chief Executive for Sindicatum Sustainable Resources, Assaad Razzouk, argued that the recent proposed cuts in solar energy subsidies announced by the UK government would in fact speed up the clean energy revolution, rather than destroying it. In an invigorating and very thought-provoking interview, REM talked to Mr Razzouk via Skype to hear what he had to say. 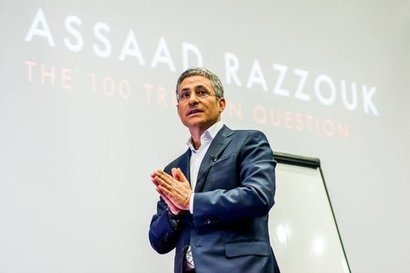 Mr Razzouk’s argument is one of a number of positive perspectives among a great deal of clamour in response to the Conservative government’s policies. This is a refreshing and welcome view, on account of his conviction that actually UK solar may actually be about to enter a new and very interesting stage in its development. So REM asked him what he thinks this will mean and how it will develop.

You said in your article that if the solar subsidy cuts are implemented it will mean more and cheaper solar panels across the UK. Can you explain a bit more about how that will happen?

First, I think you have to keep in mind that solar panels are installed by an eco-system of developers, funders, contractors, module manufacturers and what-have-you. Experience elsewhere basically shows two things. The first is that the solar revolution, if you want to put it that way, is really unstoppable, irrespective of cuts to subsidies, because it has benefitted from support for about a decade in most markets. Secondly, that eco-system in our experience is actually able to drive costs further down. What happens basically is that smart money takes advantage of subsidies in order to pocket a part of them. That has very much been the experience in the United States, in the UK and elsewhere. When you take out the subsidies, what happens is that the developers and the investors and the banks squeeze the supply chain, which, based on what is happening elsewhere, is squeezable, to deliver the pickup that you actually need to fund these projects.

Obviously I am speculating, but I am speculating based on the experience in the United States, in Germany, in India and even in markets like the Philippines. So I am just being practical. The government is going to take away the subsidies, so we’ve now got to kind of get on with it. I am not going to even go near the massive subsidies that are paid to oil, gas and coal in the UK, and also frankly irresponsible fracking push, because in some ways, though its relevant, I don’t think the industry is going to slow down anymore. I think those days are gone.

An accountant friend of mine said that falling demand could lead to higher prices in the long term as there won’t be the economies of scale. Now I am assuming what he meant by that is that the fall in demand would be caused by the decline in the rate of return, so that solar ceased to become an investment. What’s your view on that?

I don’t agree, because I don’t think demand is going to fall. There is a lot of fat right now in the industry. Take away the subsidies and the fat will be squeezed out. Prolonging subsidies will keep costs high and also I don’t think you could build a coal-fired power plant anywhere in Europe even if you wanted to. It’s really difficult, so there is a lack of alternative. There is also increased awareness of climate change, increased health awareness. We’ve got the Paris talks which will hopefully generate more coverage of these issues. The Conservative government I think is acting because of other considerations, but irrespective of their motive, I don’t think the solar rollout and revolution is going to slow down.

I don’t disagree with that. Obviously if subsidies are kept for longer, there is a whole group of stakeholders who are going to be happier. But if you want to achieve higher growth, you have to phase out subsidies, because that is how you are going to be able to sit back and watch the price of solar fall. The editor of The Ecologist recently put together a very thoughtful piece, which does criticise the government for taking away subsidies too early, but nonetheless, his conclusion is the same as mine. In a sense, his attitude is ‘bring it on’ basically. We’re obviously avoiding delving into motive, criticising the subsidies that the competition gets, frankly that’s the ‘elephant in the room’ not the solar subsidies.

How much of a factor is the image of solar as a ‘fringe’ technology, and what more does the sector need to do to really push solar and make it far more popular?

I think again we’ve got to move away from the early adopters, who have a sustainability agenda and an increased awareness of the environment, towards the public at large. We have a lot of houses in the UK where solar is suitable. To move to the public at large, solar has to be competitive on a standalone basis. The minute you start telling me that I can put solar panels on my roof, that I can get a cheque for this many pounds, that I have to do this and that to claim my subsidy, you’re basically just shutting people off. The entire industry needs to grow up and jolting it in this way is going to be an unintended consequence of these proposals.

Let’s just see what happens to these proposals. At the moment they’re still in consultation mode. My point is that instead of criticising the government which, as an industry, we’re quite entitled to, instead of attacking the subsidies given to fossil fuels, why don’t we get on with it? Because I don’t really see any other choice, and getting on with it meaning squeezing the fat off the ecosystem that gets these things built, installed and serviced. I am not talking out of thin air. This is the experience in the United States, it is the experience in Germany, in India and in The Philippines. Taking away the subsidies is not stopping the growth and on the contrary I think we’re getting better and better at it. If you receive subsidies, naturally you’re going to get on the roof and start shouting, but I don’t see what good this is going to achieve given the political stand of this government.

You said something about investors putting money into Australian solar, but what I’ve read says the country is now almost uninvestable because of Mr Abbott’s policies.

A couple of days ago Canberra announced that it is going to become 100 percent renewable in just a few years. I don’t think there’s a more eloquent fact to your point. Despite a very concerted attack by the Australian government on all types of renewables, the momentum, both from consumers and the municipalities in the cities, as well as the cost decreases, in effect is nullifying that. Don’t get me wrong, we are all complaining, but the fact is that Australia is now a hub of innovation with regard to solar power. If you look at ReNew Economy, just a few weeks ago, they had an article reporting that Australian PV market had hit a July high, boosted by commercial solar. What are we going to do about the Australian government doing what it’s doing? Or the Conservatives? They’ve been elected, and they have a free run, and so they are going to do what they are going to do. We have to be mindful of experience elsewhere before we jump to conclusions. We need mainstream finance and greater standardisation, not subsidies.

Western Australia made a big announcement a few days ago, that solar is the future as it prepares to dump coal. I figured that five days ago. That is the State Government [saying that]. The thing is, climate change is not waiting for governments, so we have to get to get on with it.

I was talking to Richard Hellen, Director of the Schumacher Institute and of Low Carbon South West recently and he said that community energy would be the thing that really moves the sector on because ordinary people will have to think creatively about how else to fund solar projects, stimulating innovative thinking about financing, is that something you would agree with?

Yes, I think we have to hope that will be the case. But community solar works best when mainstream finance is available. If you walk into most financial institutions today, they’re going to think you’re speaking nonsense, so that’s what we have to keep working on. At the moment, this is a specialised area and it needs to become mainstream. I am not downplaying the challenges but I do think that just sitting down and complaining without taking the initiative is not perhaps the best way to tackle the political developments.

How do you see things going from here? What’s the most likely move the sector will have to make in order to survive?

The next few months are going to be tough, because these proposals are just announcements and haven’t been implemented, so we’re just going to be swimming in uncertainty. There’s going to be a lot of jumping around, but I think things will then get back to normal, from the second quarter of 2016 once the proposals are on the books. We as an industry will get back to our supply chain and our stakeholders and squeeze the fat, as I expect the industry to do.

Assaad Razzouk is the Group Chief Executive Officer of Sindicatum Sustainable Resources     . He is also an award-winning developer, owner and operator of clean energy projects worldwide and a producer of sustainable resources from natural products and waste. Mr Razzouk additionally founded the Sana Gallery in Singapore, the first Middle Eastern contemporary art gallery in South East Asia, is affiliated with the Middle East Institute in Washington DC as an Expert at the Middle East-Asia Project, serves on the Advisory Board of the Hong Kong-based Association for Sustainable & Responsible Investment in Asia (ASrIA), is a Board Member of the Climate Markets & Investment Association and is an independent Board Member of Cedrus Invest Bank s.a.l.