Wednesday, 17 July 2019
0
Robin Whitlock
Norman Koch is General Manager and Technical Director of Shell Eco-Marathon, having worked for the group in automotive R&D and fuels technology since 1995. He has been an integral part of the Eco-Marathon for more than 16 years and is responsible for ensuring the programme is academically challenging for the participating student teams while also remaining relevant to global mobility challenges. What is Shell Eco-Marathon? What is its aim? And is Shell genuinely trying to decarbonise where possible? Norman Koch explains. 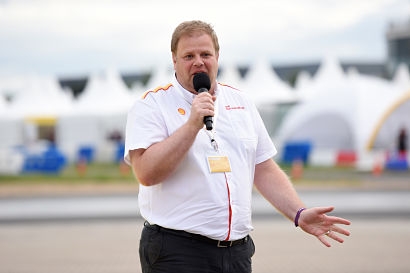 Can you give me a bit of background about what Shell Eco-Marathon is and what it is seeking to achieve?

The Shell Eco-Marathon, a global programme, is one of the world’s largest student engineering competitions for energy efficiency, so we invite students every year, around September, the start of the academic year, to design, build and ultimately drive the world’s most fuel efficient vehicle. We set effective rules, mainly to govern the safety of the cars, but also their technical specifications to some extent and we say go away and build what you think is within those rules, the most energy efficient way to drive. It is offered at the moment in three different energy categories – internal combustion, where they can choose from gasoline, diesel or ethanol – the second category is battery electric, so electric drive train driven by a lithium technology battery – the third category is hydrogen fuel cell where you run with hydrogen gas converted into electricity via a fuel cell and then driven.

Within these three categories we have two different vehicle types. Students can build what we call a prototype vehicle, these are the very low, cigar-shaped cars with three wheels. The purpose of those is to be, what we call, technology carriers. These are cars that allow blue sky ideas. Everything is trimmed and everything is designed to be energy efficient. Anything goes for energy efficiency. And then there is the UrbanConcept category, and that is the category that has been designed to be more road-relevant and real-world worthy. So these are cars with four wheels, a door, a steering wheel, windscreen wipers, lights, luggage compartment, anything and everything that you and I as a driver would expect of a moving car at least. These two categories, the students choose entirely by themselves and the energy they choose entirely by themselves. They go out, they apply for the competition, and if their technical credentials are good enough – we are over-subscribed at all events worldwide – they then go build the car or modify the car from last year if they have ideas about how to improve it, and then ultimately turn up in July at the event, and if they pass technical inspection, where we check for all the compliances and for all the specifications, then they go out on the track and compete with their peers to see who goes furthest with the least amount of energy.

What is the major effect of all this? Is this an active attempt on your part to get young people interested in low-carbon engineering for example?

Yes. That’s it exactly. I mean the Shell Eco-Marathon in its current form as a global student engineering competition has been going on since 1985 so it’s the 35th edition here in Europe and ever since its inception it was designed as a platform to inspire the scientific and engineering leaders of the future, to give them a hands-on project to test their ingenuity, their innovation and put to a real good use and test what they learn in the classroom. Of course, nowadays, where, you could say in the early days when the Eco-Marathon idea was born for students to participate, it was probably in the aftershocks of the oil crisis of the 70s, and these days of course the energy efficiency is one of the key design parameters of the cars, and how can you get more for less energy in order to minimise your carbon footprint in order to achieve more mobility for a lower carbon impact.

We have a split at the moment, and the students entirely freely which energy they use, of about 40 percent internal combustion, 10 percent hydrogen, 50 percent electricity, and even if that shows that the renewable ones are the dominating ones, I personally as an engineer still agree, even if an energy is renewable, there is no really good reason not to be economical with it and be efficient, because in the end the best energy, the best carbon saving, is from energy you’ve never used, because you can do something else with it or genuinely not spend it, so therefore the philosophy of Eco-Marathon is whatever energy you use, you need to optimise and therefore maximise your result from the energy you put into a process.

Definitely, and if you follow the announcement just recently, our CEO committed by 2050 we want to be fully in support of the Paris Agreement and by 2050 we want to be committed to reduce the carbon intensity, the carbon footprint, of all our products by 50 percent, so if you bear in mind that everything we use nowadays is 100 percent [carbon] then, for that to be reduced by 50 percent, that is quite a bold and ambitious target, so we’re definitely very much involved in this, and you will have seen that electric charging stations going up, hydrogen will become available as a fuel. So these are things that we do in our business, so it just shows that things we do here in Shell Eco-Marathon has a reflection in our business.

According to a report produced by McKinsey in 2016, it seems that younger people are increasingly abandoning the oil and gas industry in favour of the cleantech industry. I’ve seen claims that activities like Shell Eco-Marathon might be a subtle attempt to retain young people rather than have them migrate into cleaner industries. How would you respond to that?

I’m not familiar with this report, so all I can say is that we’ve been doing this since 1985 as a longstanding and ongoing commitment that we are making in the engineering space for less energy use, that our competitors are drawn from over 50 countries in the world, we had 141 teams here this 21 European countries, and that’s only the European neck of the competition, because the competition remains over-subscribed year after year after year, so I don’t think we have an unimpressive track record in really focusing in on the younger talent in giving them a purpose for their research, to aspire to achieve something, and quite frankly I see a drop in interest, but actually quite the opposite.

I am an engineer myself, so I always enjoy seeing what ideas young minds come up with and seeing the high-tech that they bring to the track. We had one team in from France beating the world record, the best ever result set by an battery electric urban concept car, achieving 234 kilometres from a single kilowatt hour of electricity. These are efficiency standards that are very amazing. The achievement and the creativity that these young people bring to the field just make me feel good for the future when they hit the employers market and start their own companies. We don’t need to worry, in a sense, that the world is running out of talent or that we have too few. That is why we want to encourage more to do this. There are a lot of good engineers and great scientists and ideas in the making.