Wednesday, 01 May 2019
0
Robin Whitlock
Lloyd’s Register has issued a manufacturing certificate to AW-Energy for its WaveRoller marine energy device which is currently using wave energy to generate electricity at the new SURGE 2 Project in Peniche, Portugal. 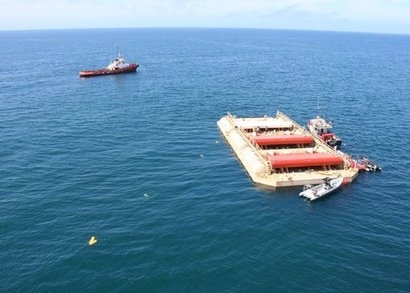 WaveRoller is a device that converts ocean wave energy to electricity, operating in near-shore areas (approximately 0.3-2 km from the shore) at depths of between 8 and 20 metres. Depending on tidal conditions it is mostly or fully submerged and fixed to the seabed. A single WaveRoller unit (one panel and PTO combination) is rated at between 350kW and 1000kW, with a capacity factor of 25-50 percent depending on wave conditions at the project site. The technology can be deployed as single units or in farms and provides a reliable and predictable source of renewable energy to the energy system that compliments more intermittent technologies such as wind and solar.

WaveRoller also taps the unused ocean energy resource that is readily available for many locations where other renewable energy sources cannot be fully utilised due to limited available on-shore area or other considerations.

The back and forth movement of water driven by wave surge puts the WaveRoller panel into motion. To maximize the energy that the WaveRoller panel can absorb from the waves, the device is installed underwater at depths of approximately 8 – 20 metres, where the wave surge is most powerful. A single panel absorbs 1.5-2 MW of power from the wave surge. The panel spans essentially the entire depth of the water column from the seabed up to the water surface level.

As the WaveRoller panel moves and absorbs the energy from ocean waves, hydraulic piston pumps attached to the panel pump hydraulic fluids inside a closed hydraulic circuit. All the elements of the hydraulic circuit are enclosed inside a hermetic structure inside the device and are not exposed to the marine environment. Consequently, there is no risk of leakage into the ocean. The high-pressure fluids are fed into a power storage and smoothing system, which connects to a hydraulic motor that drives an electricity generator. The electrical output from this renewable wave energy power plant is then connected to the electric grid via a subsea cable.

Lloyd’s Register surveyors inspected the WaveRoller manufacturing to ensure that the manufacturing processes were in accordance with the specified codes and standards; that the components were in accordance with the accepted drawings and that the manufacturing process and final product is to an acceptable quality and fit for purpose.  The main codes and standards specified are demanding but successfully used for years in the offshore oil and gas industry, where integrity and reliability is of the utmost importance.

A large portion of the operating costs of renewable energy projects is the project financing. The higher the risk the more expensive the financing costs. Much of the recent fall in the levelised cost of offshore wind has come from more efficient financing due the cost effective placement of risk to insurance underwriters. Thus to achieve cost effective project financing the technology and financial return needs to be insured. In order to obtain insurance the underwriter needs to be confident in the technology and this is achieved through third party certification. So in a nutshell certification is essential to achieve bankability.

“AW-Energy’s focus on certification of their technology is an encouraging approach for Wave Energy” said leading underwriter GCube. “When assessing risk factors from an insurance perspective, in an innovative industry such as renewables, it is important to have as much verification as possible that the risk has passed the R&D stage sufficiently to say that the technology is no longer in the trial and error phase of a prototype. A rigorous process of engineering and third party certification can be a good method of providing that verification and therefore building confidence that it can be commercially viable to insure the product.”

The SURGE2 project follows the successful SURGE project, where AW-Energy demonstrated the technology with a grid connected device producing electricity to the Portuguese grid from a site fully exposed to the ocean storms.

This project, SURGE2, is also designated the FOAK (First of a Kind) project and has been designed to meet ESB’s WestWave requirements.  Manufacturing of the main components for this new industry (begun in 2016) have been sourced globally – Canada, Finland, Italy, Portugal, Spain, Turkey and UK; the main subsystems are the foundation, power take off, panel and panel bearings. The project was financed by AW-Energy and a loan from Finland’s TEKES (now Business Finland).  Completion of the site is underway before the deployment takes place.