Harnessing the Power of the Ocean Can Help Save the Planet, According to UK Research Group

Wednesday, 22 December 2021
0
Our oceans have become overrun by the climate crisis. Sea levels are rising, coral reefs are bleaching dramatically and overfishing is rampant, jeopardizing marine life and ocean health.  Our oceans are a materials provider and have the capability to reduce our dependence on fossil fuels for energy. They are the world’s largest untapped source of renewable energy, can store heat and regulate the Earth's climate. In time for post-COP26 conversations on climate targets, UK Research and Innovation (UKRI) has produced an ‘Oceans For Good’ infographic illustrating the many benefits of our blue planet. 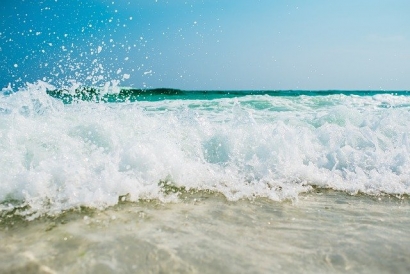 Much of the ocean science data comes from the Wave Energy Innovation Position Paper, written by the Supergen Offshore Renewable Energy Hub, an Engineering and Physical Sciences Research Council (EPSRC) funded-programme that aims to accelerate the development of offshore wind, wave and tidal technology for the benefit of society.

Other statistics derive from the Plymouth Marine Laboratory, a charity that aims to develop and apply innovative marine science to ensure a sustainable future for our ocean.

The oceans are a huge natural engine - covering 71% of our planet, making them one of Earth's largest solar collectors and a key component in marine biology that helps balance resources on land.

Ocean energy refers to all forms of renewable marine energy carried through tides, waves of different intensities, temperature variations and salinity. Moving water has an impressive amount of kinetic energy, 1000 times more than air particles; this is why up to 20% of our electricity needs can be fuelled by moving waves and tides. One of the most powerful forces for renewable energy is found in the turbulence above the oceans - tidal power moves colossal volumes of water and strong winds produce immense waves.

As more and more countries pursue carbon neutrality in the next few decades, investment in renewable marine energy is reaching new heights.

In recent years, scientists have been able to make advancements in marine science. New technologies allow us to harness green electricity in the form of wave, tidal and floating underwater turbines. There have been breakthroughs in the field of thermodynamics, and the more efficient creation of thermal generators makes it possible to convert heat into mechanical force without creating any waste by-products. Installing these eco-friendly machines will provide power for decades without pollution and also supply an extra boost to other renewable forms of energy, especially wind and solar.

Wave energy is a naturally occurring form of power derived from the force generated from driving waves at sea; it’s predictable and reduces the reliance on foreign oil imports. It’s estimated that the amount of energy stored in waves worldwide is about 80,000 TWh, of which about 2000-4000 TWh could be harvested and converted into electricity.

Tidal energy is available 24/7 along coastlines, and in light of the fact that half of the world population lives within 80 km of a coast, these figures suggest the ocean could, in the future, provide up to 10% of the world’s energy demands. Tidal power is aiming to exceed 50% market share and will likely become the dominating future energy. The oldest Tidal Power plant in the world has been producing electricity for over five decades with no expiration date in sight!

Among the most promising renewable energy sectors is the offshore wind industry. If it were to reach its peak potential, offshore wind production could generate more than 120,000 GW (11 times the world's estimated electricity demand in 2040).

The clean, renewable energy obtained by harnessing the power and force of the seas' winds is offshore wind energy. As it moves faster over the surface of the ocean, there's a greater and more consistent wind speed and this resource can generate up to twice as much energy as its onshore counterparts. To maximise the benefit of offshore wind energy, structures stationed on the seafloor are fitted with the most advanced technological innovations.