Micronesia to boast first island to be 100% renewable powered 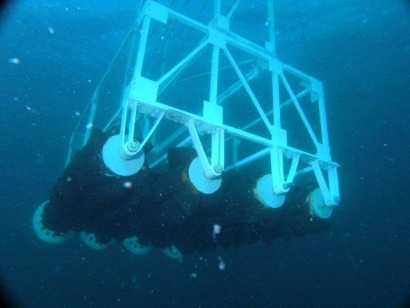 The 1.5 MW wave energy project has been launched by Ocean Energy Kosrae in the State of Kosrae in the Federated States of Micronesia, a sub-region of Oceania comprising thousands of small islands in the western Pacific Ocean.

The WaveSurfer offshore system is described by its developers as a “point absorber”, installed at a variety of depths using moorings. WaveSurfer's main power conversion and generation components are completely submerged at a depth of between 8 and 25 metres. Ocean Energy Industries says that this system “results in amazing survivability of each unit capable of withstanding extreme storms without any damage that would affect the unit's performance”.

Ocean Energy Kosrae has executed a Power Purchase Agreement with Kosrae Utilities Authority for a term of 25 years, guaranteeing a customer for the output produced by the innovative wave convertor. In doing so, the project's developers say that the State of Kosrae will become “the first Island in the world to be completely powered by wave energy and other renewable energy sources”. In doing so, the island nations have started down the path to break away from almost total dependence on fossil fuel for power generation.

WaveSurfer units are produced with rated power of 1 kW-10 MW, and according to Ocean Energy Industries “is priced per 1 kW capacity at a level comparable with the cheapest of all traditional and renewable energy generating systems”. However, they highlight that WaveSurfer “significantly outperforms such plants in construction lead time, future maintenance expenses and the cost of fuel”.

It is estimated that every kWh of energy produced by fossil fuels produces 0.43Kg of carbon dioxide, says Ocean Energy Industries, which therefore calculates that each 20 kW converter will save over 40 tonnes of carbon dioxide being released into the atmosphere every year. A single 1.65 MW converter would reduce carbon emissions by over 2,500 tonnes per annum.

In addition to the clean environmental benefits offered by this system, its developers reveal that WaveSurfer is “designed to operate in harmony with waves rather than attempting to resist them. Therefore, there is no need in massive steel and concrete structures” and that farms equipped with the device will operate in water deeper than 15 metres in areas where there are no breaking waves. Therefore, they will have no impact on popular surfing sites as breaking waves equate to areas of energy loss.

WaveSurfer operates across a variety of wave heights, making it a base load energy option, has ahigh capacity factor, is a highly scalable modular system that uses standard parts, and can be used in locations with wave energy above 10kW/m. According to Ocean Energy Industries, the device also offers a high and fast return on investment, since it has the “lowest construction cost per kW capacity and lowest energy production cost per kWh in the industry”.