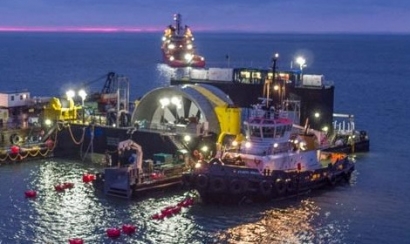 Naval Energies, one of the big names in marine renewable energies (MRE), is the only industry player to have developed three product lines: tidal turbines, with its financially troubled Irish subsidiary OpenHydro, floating wind turbines, and ocean thermal energy conversion.

Naval Energies has developed the technology of tidal-turbine energy to the industrial launch stage. On July 24th, the company deployed a new tidal turbine in Canada and connected it to the power grid. For the second time in two years, a 2 MW turbine was installed in the Bay of Fundy.

Nevertheless, the company states, “the fact remains that the market for tidal-turbine energy is closing. The French Environment and Energy Management Agency (ADEME), as part of a public debate on the Multi-annual Energy Plan for France, only foresees 100 to 150 MW to be installed between now and 2028, i.e. 50 turbines of 2 MW each over ten years.”

The United-Kingdom, for its part, also decided two years ago not to launch specific tenders and in Canada, there is also great sensitivity to the cost of the technology.

This gap between the technology and the demand on the market, and the lack of commercial prospects over the long term, are forcing Naval Energies to bring its developments in tidal energy to an end. Following in-depth discussions with public and private stakeholders as well as with the ADEME, Naval Energies decided to stop its investment in tidal energy.

Laurent Schneider-Maunoury, CEO of Naval Energies, declared, “It is with regret, but also responsibility, that we are taking the decision to stop developing tidal-turbine energy. The deterioration of the market, in France and around the world throughout the recent months, has been reflected in a lack of commercial prospects over the long term. This evolution means that we alone can no longer finance the development of the tidal-turbine activity. In the future, Naval Energies will focus its development on Floating Offshore Wind (FOW) and Ocean Thermal Energy Conversion (OTEC), which are receiving support from the public authorities.”