Thursday, 06 August 2020
0
REM
With a growing need for clean energy sources to complement wind and solar, there is an increasing need for new technology to be developed. One example of this is ocean wave energy technology, which can be deployed alongside wind and solar to add more renewables onto the grid and reduce greenhouse gas emissions as a whole. 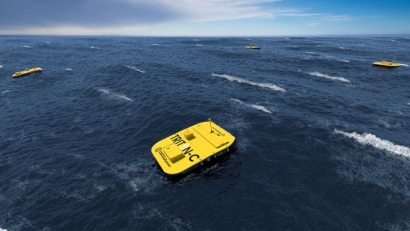 There’s a huge potential resource of wave power, but developing a system that can withstand harsh ocean environments and convert ocean waves into electricity efficiently has so far proven to be a formidable challenge.

Not only does the technology have to be engineered to capture energy efficiently across a wide range of ocean conditions, but it also has to be designed to survive and operate reliably in extreme marine conditions.

The good news is when advanced wave energy systems are designed to take all of these unique challenges into consideration, wave energy is projected to produce a more constant energy supply compared to solar or wind.

Still, the big question is, how?

Thanks to modern advances in computing power and engineering simulation software, wave technology companies such as Oscilla Power are now able to more accurately model how devices will react in real ocean waves, including extreme waves. This helps them to more quickly evaluate and optimize different designs, developing innovative and efficient wave energy technology solutions.

After years of research, testing, and modeling, Oscilla believes it has converged on an affordable and efficient solution known as the Triton system, a wave energy converter uniquely designed for optimal energy conversion in all wave conditions, including survivability in extreme weather conditions.

To understand how the Triton system achieves this, it is important to understand a little about ocean waves. Ocean energy is concentrated on the surface and reduces significantly as you go deeper into the water column.

The implications of this has a two-fold effect on wave technology:

1.) Wave technology devices will generate maximum energy on the surface but be vulnerable in extreme wave conditions.

2.) If floating devices can submerge just below the surface they can be safe from dangerous waves.

Oscilla engineered the shape, architecture and power conversion system of the Triton to take advantage of these factors. The resultant design is a big surface float designed to move as much as possible under all wave conditions, and a submerged large concrete ring a few tens of meters below the surface. The concrete ring is designed to move as little as possible. The relative movement of the highly active surface float and the stable concrete ring is engineered to create efficient energy capture across all wave conditions.

However, when the surface float becomes vulnerable to damage in extreme storms, Oscilla can remotely partially or fully submerge the entire system, so that the surface float will react less to the waves. In such ‘survival’ circumstances the system can still continue to generate power, even though it is now just below the water surface.

The submersible feature has been shown to be sufficient to survive a 60 foot wave, as can happen off the US West Coast. Simultaneously, building in such a survival strategy helps mitigate the Triton’s capital and maintenance costs.

Ultimately, Oscilla’s vision is that Triton will be able to provide more constant, reliable, and predictable power than wind or solar, and by doing so, alleviate many of the criticisms of variable renewables.

Currently, Oscilla is raising capital to complete the construction and initiate the deployment of the community-scale Triton C system.