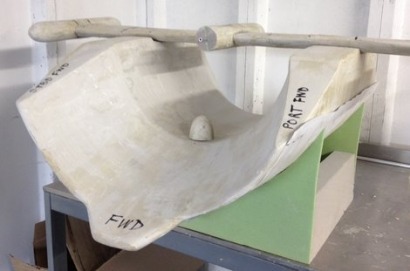 Subhub is a foundation structure for wave and tidal turbines which commissions, tests, transports, installs, and anchors a mini array of wave and tidal turbines to the seabed using unique features and methods including commissioning and testing, transportation, positioning, connection, installation, increasing the power output by increasing flow speed and retrieving the turbines for maintenance or removal.

The device has been designed to help reduce the cost of deployment of wave and tidal turbines and to reduce the need for large installation vessels for deployment. It is initially towed to the tidal site by a single harbour or offshore tug. Once in place it will be used to deploy tidal energy devices efficiently assisted by its high stability characteristics which also allow large operational weather windows leading to high deployment rates according to schedules.

SubHub has a hydrodynamic shape which boosts power output by accelerating tidal flows into its rotor. Its mooring system is deployed remotely from an installation vessel. Once in place the device is ballasted down until it is nearly weightless in the water with a downforce applied from the oncoming tide. This gently allows it to fly to the seabed while also aligning it in the direction of the current. Once fully ballasted on the seabed, SubHub can produce power on the first tide.

“We are delighted to be partnering with Kelvin Capital who have been quick to recognise the UK and global potential for the Subhub in an immature market which is showing strong signals as being the next high growth energy industry” said Jeremy Smith, managing director of QED Naval. “Tidal energy has the potential to fulfil 20 per cent of the UK's current energy consumption putting a severe dent in our requirement for fossil fuels. We are confident that we can deliver a step change in deployment costs of tidal turbines offering improvements in power output, and hence revenue, as another benefit. These funds will allow us to commercialise the Subhub in a strategic manner, to minimise the technical risks of the project providing confidence to the investors.

“The next six months will see us prove the system in the world class Flowave tank testing facility in Edinburgh, that will independently verify the design and design process.

The £550,000 funding package was received from Kelvin Capital and the Scottish Investment Bank to support the continued development of the SubHub. This will allow the company to conduct tank testing of two models of the device within the FloWave testing facility in Edinburgh. This will in turn allow QED Naval to validate the current design against three principle objectives which include verification of the design process and tools, provision of evidence of performance claims regarding increased power output and definition of the limitations from extreme loading events from wave and tidal forces.

The company says it is on course to deliver a community scale prototype delivering an array of tidal turbines to a test site, capable of producing a 150kW, equivalent to supplying power to over 120 homes, by 2016.