Thursday, 03 July 2014
0
Robin Whitlock
A collaboration agreement outlining a commitment to work together in the marine energy sector has been signed by organisations in the south west of England and Pembrokeshire. 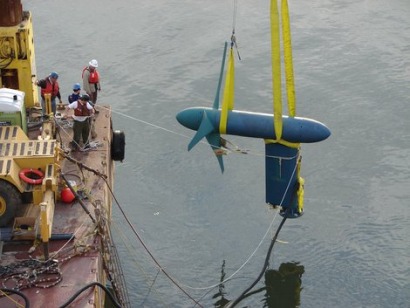 A Memorandum of Understanding (MoU) was signed on 27th June 2014 by the South West Marine Energy Park and Marine Energy Pembrokeshire, building on the strong relationship already established between the two regions. Collaboration will increase business opportunities in the growing UK marine energy sector with the two regions combined marine energy resources offering a strong contribution.

“The Celtic Sea area between Cornwall and Pembrokeshire, and the Bristol Channel have fantastic marine energy resources which could be developed over the next decade” said Chair of the South West Marine Energy Park, Peter Kydd. “It makes sense therefore that partnership organisations on the Welsh and English sides of the channel work together to ensure that projects are developed sustainably and to maximise the economic benefits for both regions.”

The scope of the agreement will initially be focused on wave and tidal energy but this could be widened to include future offshore wind opportunities. Areas of collaboration that have already been identified include encouraging business networking and collaboration, supply chain and skills development, research programme development and sharing of best practice in the areas of planning, environmental and stakeholder engagement.

“There are growing ties between the south west of England and South Wales” added Director of Regen SW and the South West Marine Energy Park, Johnny Gowdy. “If we are going to sustainable exploit the marine energy resources and generate long term economic opportunities it makes sense to work together.”

According to Tonia Forsyth, Project director of Marine Energy Pembrokeshire, Wales is entering a critical phase in the growth of marine renewable energy. There is increased interest from developers and new structural funds prioritising marine energy. The region’s first tidal device will be deployed in Ramsay Sound, Pembrokeshire, later in 2014.

“If we are to really maximise the opportunities for Pembrokeshire it is vital that we collaborate with other parts of the UK” Ms Forsyth said. “The South West is a natural partner for Pembrokeshire with the two areas combined offering excellent energy resource, unrivalled port infrastructure, skills, support services and grid opportunities creating a Celtic Sea marine energy Hub moving the two regions towards a new green low carbon economy.”

The South West is the first region in the UK to have been designated a marine energy park - the South West Marine Energy Park (SW MEP) – which is a collaborative partnership between local and national government, Local Enterprise Partnerships, technology developers, academia and industry. It is a recognised physical and geographic zone, extending from Bristol to Cornwall and including the Isles of Scilly, with priority focus for marine technology development, energy generation projects and industry growth. It is focused around the various ports, research facilities and industrial clusters in the region, particularly in Cornwall, Plymouth and Bristol.

Marine Energy Pemrokeshire (MEP) is a not-for-profit partnership working to create a centre of excellence for marine renewable energy in Wales. It provides a unique model for collaborative business support for marine energy development with members of its working group comprising marine energy technology developers, supply chain companies, academia and statutory bodies. Membership has been growing rapidly since its formation in 2010 and there are now 40 MEP working group members including 20 technology developers and over 500 contacts.