Friday, 11 March 2022
0
REM
Ingeteam has presented its new strategic plan for 2022- 2024, which aims to consolidate its position as a leader in power conversion technology, which makes the electrification of society possible. It is a plan for growth (in terms of turnover and staff) and investment (both in technology and facilities). The plan anticipates the creation of 1,000 jobs, more than 100 in R&D. Ingeteam currently employs 4,100 people and the workforce is expected to reach 5,100 by the end of 2024. In addition, the company has announced a turnover objective of nearly €1bn for 2024, which would entail culminating the strategic plan with a 44% growth in turnover. 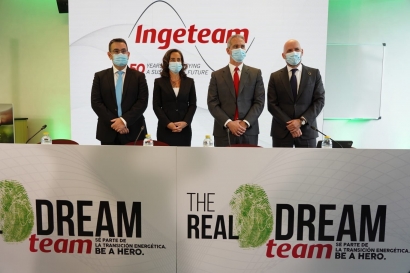 The 2022-2024 strategic plan constitutes the roadmap that will take Ingeteam to the next level, achieving nearly €1bn in turnover. The company has implemented matrix management, with a customer-focused sector orientation, to drive sales of its full range of products, systems and services. It has complemented this sectoral organisation with 8 functional areas and 3 technological segments (electric machine, converters and control, and services) that pursue an overall specialisation, the mainstreaming of best practices and internal efficiency. It has put in place ambitious investment plans to consolidate its position as a technological leader in the sectors in which it operates. The renewable energy market is set to grow rapidly in the coming years and with its new Strategic Plan Ingeteam aims to position itself as a key player in the energy transformation.

Ingeteam's range of products, systems and services covers the growing electrification of society via its technological solutions, which enable more efficient and sustainable energy generation, transmission, storage and consumption.

The company is committed to an international, economically sustainable project to maintain its level of investment in facilities and R&D, and the creation of quality jobs, with a social and economic impact in the territories where it operates, without forgetting its roots.

In this context, Ingeteam plans to invest a total of €210m over the next three years, of which €140m will go to R&D and €70m to investment in new facilities and the improvement of existing ones. Specifically, it will invest in two self-consumption photovoltaic facilities at its plants in Beasain (Gipuzkoa) and Sesma (Navarra). The first produces Indar brand marine engines and generators (which enable electrical energy to be generated from mechanical energy) for wind, marine, hydraulic and stationary power plants, as well as pumps. The second manufactures solar inverters (which make it possible to generate electricity that can be fed into the grid from solar panels), inverters for charging and discharging batteries used in storage projects, electric vehicle chargers, and wind turbine converters (which enable wind turbines to generate electricity that can be fed into the grid). It will also undergo expansion to accommodate growth in these areas. It also intends to invest in a new building in Navarre that will house a new test laboratory and offices. Ingeteam will also upgrade capacity at its Milwaukee (USA) plant to make it more versatile and serve more domestic customers in more sectors.

Ingeteam celebrates its 50th anniversary this year, whilst playing a key role in the energy transition, consolidating its commitment to the electrification of the future, with an international structure and a presence in 24 countries on 5 continents, where it employs almost a third of its total workforce.

The company closed its 2019-2021 strategic plan having achieved 97% of its turnover objective with sustained profitability, which was below target, weighed down by the effects of the pandemic, the rise in the cost of energy, the cost of insurance or the rise in the cost of raw materials and global logistics. It has met 100% of its R&D investment objectives, investing 103M in the period, and has met its staffing objectives. The Ortuella plant was successfully integrated into Ingeteam's production process. Today, the plant employs more than 100 people and produces converters for marine, mining and steel production (which enable electric motors to operate) and for traction implementations (which make it possible to draw power from catenary lines to power train engines). An adjoining 4,000m2 plot of land has also been purchased in anticipation of future growth.

Ingeteam has a record-breaking order book totalling more than €800m, supported by its most solid customer base ever and its extensive diversification, both geographical, with a presence in present in 24 countries exporting over 80% of its production, and in terms of sectors, including high-growth sectors, whether linked to sustainable generation or the efficient transmission, storage and consumption of electrical energy. Ingeteam has positioned itself as a major player in the power conversion market and has focussed its range of products, systems and services on the wind, solar, electric mobility, electric grid, green hydrogen, hydraulic generation, naval, traction, steel, water, mining and energy storage sectors, amongst others.

The current geopolitical crisis has reinforced the company's aim to participate in the energy transformation process by providing cutting-edge technology and services.