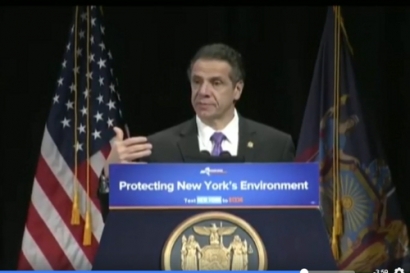 "This is the single biggest investment by any state in history," Cuomo said.

The governor said the projects will create 3,000 high-paying jobs and spur $3 billion in private investment.

Just as importantly, he said, the combined projects will create enough electricity to power 420,000 homes and reduce the amount of carbon emissions produced in the state by an amount equivalent to eliminating 340,000 cars from local roads.

But Cuomo wasn't done. Revealing what he called the "most ambitious renewable energy mandate in the country," the governor also announced the state intends to add 2.4 GW in offshore wind power by 2030 -- enough to power 1.2 million households.

"And today we announced two new procurements toward installing 800 MW of wind energy off the shore of Long Island," he said.

This project alone will create 5,000 jobs and spur a total investment of $3 billion.

"New York is going to lead a countermovement to what this administration is doing," Cuomo said. "We vowed to be coal-free by 2020 and we have the most aggressive clean energy program in the country.

The governor said New York is committed to getting 50 percent of its energy from renewable sources by 2030 "setting the bar high for every other state in the nation."

"That's where the world is going to go and we need to get ahead of the market and have New York lead the way," he said.

The White House proposal would sell leases to all the undersea tracts the government owns that have not previously been leased to energy firms.

The tracts are located along the Southeast coast, continue around to the Gulf of Mexico, and include sizable areas off the California, Oregon, Washington State and Alaskan coasts in the west.

The sale of leases on 77.3 million acres in the Gulf of Mexico is scheduled to be held on March 21.

Gore said it makes no sense to drill for more oil and gas at a time when energy from renewable sources is taking off and creating new jobs. He added that expanded drilling would set back efforts to combat climate change.

Cuomo said New York's formal comment to the plan is that the state will seek to be exempted from any federal plan to expand drilling due to the potential adverse environmental and human health impacts stemming from that activity.

"But my personal comment to the Interior Secretary is that offshore drilling is a really, really dumb idea," Cuomo said.

"First of all, it is the exact opposite direction that we should be headed as a nation," he continued. "This administration has a glorified, retrospective view of America. They say, 'Let's make America great again,' 'Let's go back to the good old days ... when we used fossil fuels.'

"That's like saying, 'Let's go back to the good old days when I was 21 and smoked two packs of Camels a day and got lung cancer," Cuomo said. "Going backwards is literally going back to a time when we did tremendous damage to the environment, much of which is irreversible and much of which we are fighting today."

Gore thanked Cuomo for taking that position, saying it "re-emphasized the extraordinarily special nature of the climate and environmental leadership this governor has been demonstrating in this office."

Later Gore said Cuomo, whom some are touting as a potential Democratic candidate for the presidency in 2020, "has demonstrated that political will is also a renewable resource."

During his remarks, Cuomo said that since 1969 there have been 44 major oil spills in the waters of the United States -- "despite all the so-called advancements in technology.

"The worst was in 2010 when the BP Deepwater Horizon exploded and dumped 4.9 million gallons of crude oil into the Gulf of Mexico," the governor said. "Now, instead of protecting our water from another oil spill, this administration is increasing the potential for another major oil spill.

"This administration is not only increasing the changes of another disaster taking place, its entire policy ignores all the lessons we learned and all the damage we've done in the past.

"They still want to go back to the good old days of the 1950s and 1960s ... a period that was not that good for the environment. And they're saying this while rolling back regulations and expanding the activity at the same time."

Cuomo said faced with such a wrongheaded policy, New York State had no choice but to act.

"We could pray and ask for a miracle, prayer works ... or we could do something. Rather than lament your situation do something about it, that's the New York way," he said. "That's smart environmental policy and it is also the right thing to do as parents and citizens. Let's restart the environmental movement and show this administration the true path forward."

Tags: Oil ,Offshore ,Jobs ,Renewable energy ,Wind ,Wind energy ,Climate change ,Electricity ,Fuel ,Hydro ,Ocean ,Solar ,United States ,Carbón ,México
Add a comment
Angus
"The White House proposal would sell leases to all the undersea tracts the government owns that have not previously been leased to energy firms" This maybe an attempt at preventing renewable energy companies from obtaining the seabed leases needed to build offshore projects. The sad part is this may work. Leases could be tied up for decades through permits and court battles since the federal government holds the upper hand in this scenario.
¡Suscríbete!
biogas