Thursday, 10 February 2011
1
Toby Price
As part of the EU project EurObserv’ER, the Energy Research Centre of the Netherlands (ECN) has analysed the turnover and employment of renewable energy companies in the Netherlands, finding that renewable energy provided in excess of 10,000 direct jobs in the country for the first time in 2009. 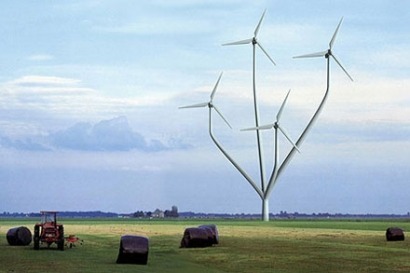 The analysis performed by the ECN involved compiling an inventory of companies that are active primarily in wind energy, solar energy, biofuels, other biomass, the renewable fraction of energy from municipal solid waste combustion, and geothermal energy. ECN estimates the turnover of these companies in the Netherlands at €3.8 billion.

They report that “turnover and employment of renewable energy companies is largely related to solar photovoltaic systems, energy from the biogenic fraction of municipal solid waste, wind energy, and solar thermal energy (for hot water)”. Indeed, an analysis of the headline figures of the report gives an interesting snapshot of the renewable industry in this small northern European country.

By the end of 2009, the combined on- and offshore wind capacity in the Netherlands stood at 2,221 MWe, supplying 4.578 TWh to the grid. The turnover of wind energy companies in the Netherlands is estimated at €820 million and the number of employees at 1,350.

Total installed capacity of PV in the Netherlands stood at 68 MWe by the end of 2009, supplying 0.046 TWh to the grid. Based on a detailed overview of PV related companies and activities, the turnover of PV companies is estimated at €1,025 million, while it is estimated 1,240 are employed in this sector. Turning to solar thermal energy, the Netherlands boasted 539 MWth of capacity by the end of 2009, supplying the energy equivalent of 0.90 PJ. Segment turnover is estimated at € 57 million, while the number of employees in 2009 was 1,500.

Biodiesel, bioethanol, and biomethanol companies produced the energy equivalent of 15.4 PJ in 2009, generating a turnover tentatively estimated at €350 million and employing 400 staff.

The primary energy equivalent of solid biomass was 43.1 PJ in 2009. Based on fragmented data, the turnover is estimated at €65 million, and the number of employees is put at 250.

At least six companies produce equipment for biogas plants. In 2009, the primary energy equivalent of biogas was 8.5 PJ. The turnover is tentatively estimated at €95 million, and the number of employees including operation and maintenance of biogas plants is put at 1,000.

Nine companies are engaged in energy generation from municipal solid waste, resulting in a primary energy equivalent of the biogenic fraction of 14.4 PJ in 2008. The turnover of these companies is estimated at € 1,100 million, and the number of employees at 4,250.

There are about eight companies active in hydro power or related technologies. In 2009, the total hydro capacity stood at 37 MWe, supplying 0.098 TWh to the grid. The turnover of this segment is estimated at €1.5 million, with only 30 people being employed.

Finally, according to the report, the amount of primary energy conserved by deep geothermal energy stood at 0.158 PJ in 2009. There are tens of companies engaged in (deep) geothermal energy in the Netherlands, with an estimated turnover of €50 million and employing 95 staff. For shallow geothermal energy – storage of heat and cooling based on shallow aquifers – and for geothermal heat pumps, no (reliable) data were retrieved.

“Current energy and climate policies warrant a strong growth of renewable energy in Europe and in the Netherlands,” say the report’s authors, P. Lako and L.W.M. Beurskens. “It is to be expected that most renewable energy categories will show healthy growth… the Netherlands will succeed in reaping the benefits of technological development.”

The data in the ECN study have been fed into the EU-wide EurObserv’ER publication “The State of Renewables in Europe,” which will be published this month.