Friday, 02 March 2012
0
REM
As the nation's power system ages and grows insufficient, University of California researchers are building a smarter, greener electric grid for the future, which will enable drivers to power up their cars by plugging them in to a grid predominately powered by solar, wind and other renewable energy sources. 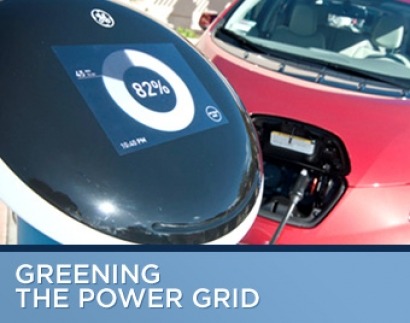 As the University of California points, expanding such a model to the US’s current electrical grid is challenging and a renewable energy-based system will require new technology to facilitate the large-scale transmission and storage of solar and wind power. “As more electric cars hit the road, a new system is needed to handle all the motorists trying to charge up at the same time,” they say.

Researchers at University of California campuses and labs are therefore working on a myriad of projects to develop and deploy systems to modernize the nation’s electrical system into one that relies on renewable energy and reduces greenhouse gas emissions. The so-called smart grid is part of President Obama’s clean energy initiatives and is needed to implement Gov. Jerry Brown’s call for installing 12,000 megawatts of renewable power generation in California by 2020.

Much of the nation’s power system was designed more than 100 years ago and many of its parts are more than 50 years old.

“One of the major challenges we face and one of the reasons we need a smart grid is the introduction of renewable power,” said Jack Brouwer, lead researcher on the Irvine Smart Grid Demonstration Project, which is using campus housing at UC Irvine as a testing ground. “So, we need something that’s smarter than what we’re doing now.”

The current grid was built for consistent, one-way transmission of power from large generation centres into homes and businesses. Renewable energy sources don’t behave that way. They have variable loads that ebb and flow with the amount of sunshine or wind that generate them. The grid also can’t handle the influx of electric cars that’s expected in the near future.

“Now you have solar rooftops which essentially allow power to flow back to the grid,” said Rajit Gadh, director of the UCLA Smart Grid Energy Research Center. “The grid operation is not used to getting information back from the consumer.”

Gadh envisions homes in the future having appliances that can talk wirelessly to the electric grid and turn off during peak periods or draw from batteries that store excess power generated from the house’s solar panels. In the garage, there would be an electric charging and power storage station for cars. Neighbors could form a collective to offer power back to a utility.

“All these ideas, we’re exploring and one day I think they will happen,” said Gadh, who cautions that it could still take up to 25 years to update the country’s infrastructure to enable widespread use of these new technologies.

Gadh and other UC researchers are working to make this future come true. Among the numerous projects throughout the UC system, engineers and scientists at UCLA, UC San Diego and UC Irvine are utilizing their campuses as living labs for studies of smart grid technologies.
Wireless technology

The UCLA Smart Grid Energy Research Center focuses on wireless communication technology and smart charging stations for electric cars. It is part of a smart grid demonstration project funded by the Department of Energy and the Los Angeles Water and Power Department and partnering with the Korea Institute of Energy Research to develop new technologies.

The center has outfitted several UCLA engineering school buildings with sensing and control systems to explore new smart grid technology. The devices can gauge and adjust the amount of power needed in a room; and control appliances, lights, and heating and air-conditioning systems, depending on occupancy and energy pricing or power availability on the grid. The smart car chargers operate similarly and can power down if grid conditions are not optimal.

UC San Diego has its own smart grid that generates more than 80 percent of the campus’s energy needs via a cogeneration plant, a fuel cell that operates on natural gas reclaimed from a landfill and an array of solar installations.

The UC San Diego micro grid is connected to the state’s electrical grid although it is largely self-contained (the campus’s lights stayed on during a September 2011 blackout that hit Southern California). The system monitors energy use on campus in a way that maximizes efficiency and provides researchers with a platform to test ideas that someday could be implemented nationwide.

Having a micro grid on campus is crucial to environmental engineering professor Jan Kleissl’s research on making photovoltaic systems more cost effective by devising solar forecasting technologies to predict the availability of sunshine, minutes to days in advance. “Many of the grants would not have been possible without having the micro grid as a test bed,” Kleissl said.

Accurately forecasting cloud cover patterns allows energy managers to predict the amount of production from their system. If there’s no sunshine, the reduction in local solar power generation can be balanced by reducing load or switching to conventional energy sources. The predictability also allows purchased electricity to be bought ahead of time at potentially lower prices.

Kleissl is able to develop different solar forecasting techniques using local measurements and test them for forecast accuracy. His data is part of the information that can be used by campus energy managers to optimize the micro grid system. “There’s always a need to collect data and to demonstrate research results,” Kleissl said. “That is easily accomplished on the micro grid.”

UC San Diego is also part of an effort, called Smart City, to create a model electrical grid system for charging electric cars. The campus is partnering with the city of San Diego, San Diego Gas & Electric, General Electric and CleanTech San Diego on the project.

Research at UC San Diego will involve charging stations and electric cars that members of the campus community can lease. Scientists will test the technology and analyze consumer behavior.

The partnership’s goal is to accelerate the use of electric vehicles in San Diego and elsewhere. The project highlights the importance of partnerships with private industry for the campus, UC San Diego Chancellor Marye Anne Fox said when announcing the initiative last year. “Each of us will bring to the table our own strengths,” Fox said.

At UC Irvine, 40 homes in the University Hills neighborhood of faculty and staff housing are taking part in the Irvine Smart Grid Demonstration Project, a partnership between the campus, Southern California Edison and other corporate partners.

In the experiment, 30 of the homes are being outfitted with smart technology such as photovoltaic systems, battery storage and wirelessly networked appliances. The rest will have no smart-grid attributes but will be monitored and serve as control subjects.

Some of the houses also will test charging and power storage systems for electric cars, which will begin taxing the electric grid as they become more popular. The current power grid wouldn’t be able to handle the load if more than 20 percent of the nation’s cars were electric, said Brouwer, who also is an assistant professor of mechanical and aerospace engineering and the associate director of the National Fuel Cell Research Center at UC Irvine.

“People have in their minds a vision that if we already have the electric grid, why don’t we just plug in electric cars?” Brouwer said. “The problem is that the infrastructure was not built with this in mind. None of circuits were built with that power demand in mind.”

A neighborhood full of university professors offers an informed group of test subjects who ask a lot of good questions, Brouwer said. “We have an understanding audience. They know it’s part of a research project, and they want the research to be successful.”