Wednesday, 01 July 2020
0
Dan McCue
House Democrats took to the steps of the U.S. Capitol Tuesday to unveil an ambitious plan to address climate change by pushing for the greater adoption of renewable energy and setting a goal of net-zero greenhouse gas emissions by 2050. 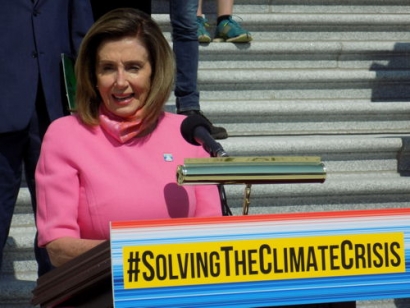 Speaker of the House Nancy Pelosi (Photo by Dan McCue)

In addition, and very much a reflection of the mood of the times in the U.S., the plan calls for sustainable job creation and cleaning up the environmental contamination that disproportionately harms low-income and minority communities.

The new plan, set forth in a 538-page report, is the byproduct of 17 months of work by the House Select Committee on the Climate Crisis.

"We are here today to provide hope and vision,'' said Rep. Kathy Castor, D-Fla., chairwoman of the select committee.

In remarks delivered under a bright sun on a particularly hot morning in Washington, D.C., Castor described the Democratic plan as a "transformative road map for solving the climate crisis.''

She promised that if enacted, it would create good-paying jobs in solar and wind energy and in manufacturing electric vehicles, while ensuring that communities are more resilient to flooding, extreme heat, intense hurricanes and wildfires.

While the proposal is likely to be approved in the Democrat-controlled House, Republicans on the Hill and in the White House slammed it almost before Tuesday’s press conference was over.

House Minority Leader Kevin McCarthy, R-Calif., dismissed the proposal as a job-killer that would "punish" the American economy.

In the meantime, White House spokesman Judd Deere said the Democrats appear intent to push "radical" green policies "that would cripple America's economy and crush the poorest communities across the globe."

None of the Republicans on the select committee endorsed the plan and it was unclear Tuesday whether committee Republican will issue a counter report.

"Our next action is to be determined," a spokesman for the group said.

As evidence of just how wide the gulf between Democrats and Republicans is on the issue, hours after the Democrat's event, the Energy Department released a 56-page report calling on four states -- Pennsylvania, Ohio, West Virginia and Kentucky -- to build themselves up as a regional petrochemical production and manufacturing hub.

Democrats are hoping to make inaction on climate change by congressional Republicans and the Trump administration a key campaign issue in November's election.

And supporters of the plan are pinning their hopes on Democrats pulling off a trifecta in November, holding the House, while taking the Senate and the White House.

Significantly, the report released Tuesday is only a planning document, containing, literally, thousands of proposals and targets. It will be up to legislative committees in both the House and Senate to enact legislation to put its various components in motion.

Heavy trucks, like those used in supply chains and in construction, would be required to eliminate greenhouse gas emission by 2040, the same year similar rules go into effect across the power sector.

To achieve net-zero emissions in the U.S. by 2050 the committee calls for an overhaul of U.S. railroads, a crackdown on methane emissions from the oil and gas industry, an investment in carbon-capture equipment and a phasing out of hydrofluorocarbons, a family of potent gases used as refrigerants and aerosols.

The plan calls on Congress to support rapid deployment of wind, solar, energy efficiency, and other zero-carbon energy sources and construction of new transmission infrastructure to deliver clean energy to homes.

Furthermore, it says, Congress should incentivize more domestic manufacturing of clean energy, clean vehicle, and zero-emission technologies along the whole supply chain and support retooling and construction of manufacturing and industrial facilities.

It also tasks lawmakers with launching new economic sectors to meet the nation's climate goals, such as direct air capture and low-carbon building materials, and to ensure new jobs in the clean energy economy are high-quality, good-paying jobs by strengthening workers’ rights to organize a union and ensuring federal spending only supports projects that meet high-road labor standards.

The report also endorses the idea of a carbon tax, described as a "carbon pricing system," but said it should be considered "only one tool to complement a suite of policies to achieve deep pollution reductions and strengthen community resilience to climate impacts."

"Carbon pricing is not a silver bullet," the Democrats said.

The Democratic plan is similar to one proposed by former Vice President Joe Biden, the presumptive Democratic nominee for president.

Biden's plan also sets a goal for net-zero greenhouse emissions by 2050 and pledges an enforcement mechanism that includes milestone targets no later than 2025.

A Biden spokesman on Tuesday applauded Pelosi and House Democrats and said that as president, Biden "will work with Congress to implement a bold agenda that addresses the climate emergency, achieves environmental justice and creates good-paying jobs."

"Democrats know the climate crisis is the existential crisis of our time, threatening public health, jobs and the economy, national security and our values,'' said House Speaker Nancy Pelosi in remarks delivered at the Capitol event.

"Our plan embraces the opportunity to solve this crisis by building a new, clean energy economy that creates millions of good-paying jobs with strong labor and environmental justice measures in place to protect those workers," she said.

The new plan has already received the support of  more than 90 outside organizations, including major environmental groups and leaders in environmental justice, agriculture, public health and transportation.