US President speaks at length about renewables, climate change in State of the Union

Wednesday, 13 February 2013
0
Dan McCue
Declaring that the US is " finally poised to control our own energy future," President Barack Obama last night used the occasion of his annual State of the Union address to speak at length about his commitment to renewable energy and to taking deliberate steps to address climate change. 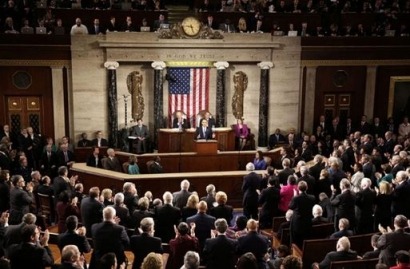 While the lengthy address before a packed, joint session of Congress touched on several hot-button issues in the US, including immigration reform and stemming the rising tide of gun violence -- as the president spoke, one such incident was coming to a head as police in Los Angeles, Calif., cornered and eventually killed a rogue police officer who murdered three deputies -- renewable energy, climate change and energy efficiency were all high on President Obama's agenda.

"Today, no area holds more promise than our investments in American energy," the president said. "We produce more oil at home than we have in 15 years. We have doubled the distance our cars will go on a gallon of gas, and the amount of renewable energy we generate from sources like wind and solar -- with tens of thousands of good American jobs to show for it ... And over the last four years, our emissions of the dangerous carbon pollution that threatens our planet have actually fallen."

"But," he continued, "for the sake of our children and our future, we must do more to combat climate change."

The president noted went on to note the 12 hottest years on record have all come in the last 15, and that heat waves, droughts, wildfires, floods are all now more frequent and more intense.

"We can choose to believe that Superstorm Sandy [which ravaged the Northeastern US last fall], and the most severe drought in decades, and the worst wildfires some states have ever seen were all just a freak coincidence. Or we can choose to believe in the overwhelming judgment of science -- and act before it’s too late," he said.

"The good news," he added, "is we can make meaningful progress on this issue while driving strong economic growth."

The president urged Congress to pursue a bipartisan, market-based solution to climate change, similar to one championed by Senators John McCain and Joe Lieberman a few years ago.

But, he warned, "if Congress won’t act soon to protect future generations, I will," eliciting applause from the Democratic side of the aisle.

Among other things, President Obama vowed to direct his Cabinet to come up with executive actions the administration can take to reduce pollution, "prepare our communities for the consequences of climate change, and speed the transition to more sustainable sources of energy."

Speaking of market competition in the renewables sector, Obama recalled that when he took office, many other countries dominated the renewable energy sector.

"We have begun to change that," he said. "Last year, wind energy added nearly half of all new power capacity in America. So let’s generate even more. Solar energy gets cheaper by the year -- let’s drive down costs even further. As long as countries like China keep going all in on clean energy, so must we."

But renewables weren't the only energy source on the president's agenda. He also spoke of the natural gas boom of the last few years in the US, saying that it has led to " cleaner power and greater energy independence."

"We need to encourage that," he said, vowing cut red tape and speed the issuance of new oil and gas permits.

While that cheered supporters of the oil and gas industries in the chamber, President Obama tempered their enthusiasm by stressing any initiatives supporting natural gas exploration have to be part of a comprehensive, all-of-the-above energy plan.

He then went on to propose the government use some of the revenues it gets from oil and gas sales to fund an Energy Security Trust that will drive new research and technology to shift cars and trucks driven in the US off oil for good.

The president also set out his vision of a new goal for America: to cut in half the energy wasted by homes and businesses over the next 20 years.

"We'll work with the states to do it," he said. "Those states with the best ideas to create jobs and lower energy bills by constructing more efficient buildings will receive federal support to help make that happen."

After the president spoke, FactCheck.org, a nonprofit, non-partisan "consumer advocate" on public policy based at the University of Pennsylvania, said the president overstated the nation's achievements when it comes to gas mileage, while agreeing he was generally correct on his renewable energy-related claims.

In its analysis, the group said the president's claim the US has “doubled the distance our cars will go on a gallon of gas” isn’t remotely close to being true right now.

In fact, it said, according to the University of Michigan’s Transportation Research Institute, the average EPA city/highway sticker mileage of light duty vehicles sold last month was 24.5 miles per gallon. "That’s quite good — a record, in fact. And it’s 17 percent better than the 21.0 mpg for vehicles sold four years earlier, in the month Obama took office," Fact Check.org said. "That’s an impressive gain, but it’s a far cry from having “doubled the distance our cars will go on a gallon of gas.”

"Obama was referring to his administration’s actions for raising future federal fuel efficiency standards, which call for cars and light trucks to achieve 54.5 mpg by the model year 2025. But it remains to be seen whether automakers can produce — and consumers will buy — vehicles that achieve such a doubling of average mileage a dozen years from now," the group continued.

FactCheck.org went on to say the president was correct when he said wind and solar energy have doubled, but noted "they’re still a very small percentage of energy production and consumption in the US."

The organization said it looked at this claim when Obama made it several times on the presidential campaign trail last fall. "We found that wind and solar energy generation had doubled from 2008 to 2011. Consumption for wind also doubled, and it nearly doubled for solar," it said.

More restive about the president's remarks was Matt Jurecky, Global Director of Energy Research and Consulting at GlobalData, a business intelligence firm that counts the oil and gas industry as one of its areas of focus.

Jurecky accused the president of offering no leadership at all in the fossil fuels arena.

“With an economy resigned to crude oil prices hovering near $100 per barrel and natural gas prices having maintained a sub $5.00 per million British thermal units pattern for over two years, President Obama blanked the oil and gas industry in his annual State of the Union address,” he said in a written statement.

He was particularly angered by the Energy Security Trust proposal and said the president ignored the importance of the oil and gas industry to US job creation, the shrinking the trade balance, and in providing increased government revenue.

He also criticized the president for failing to even mention fracking regulation, approval of the Keystone XL pipeline, and the exporting of domestic LNG.

“An absence of these issues from the administration’s agenda and their lack of priority mean that the private sector will be required to continue leading the charge on replacing crude imports from unfriendly nations, advancing safer drilling of unconventional reservoirs, and creating a mega-industry in natural gas,” Jurecky said.