Friday, 25 February 2022
0
Robin Whitlock
Renewable energy producer EDP Renewables (EDPR) has announced that all pending regulatory conditions have been met for the agreement reached in November to acquire a 91 percent stake in Sunseap, the largest distributed solar power operator and the fourth largest solar power operator in Southeast Asia. 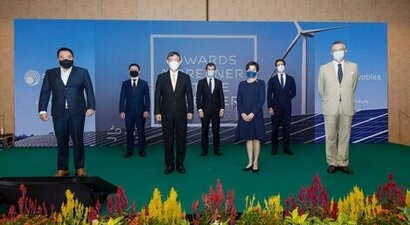 This acquisition enables EDPR to ensure a truly global reach and to address its increasing global client base, while diversifying at the same time growth sources, and allowing for exposure to additional high-quality regulatory systems and resource environments.

Additionally, following the closing of its S$1.1 billion deal with Sunseap today, EDPR has stated it plans to invest S$10 billion by 2030, creating an industry-leading clean energy hub for the APAC region out of Singapore. These investments are in line with the company’s strategy for the Asia Pacific region in general, it being the world’s fastest growing renewables market accounting for 55 percent of global capacity additions this decade, with solar representing 65 percent of the growth.

The acquisition will balance the synergetic potential driven from EDPR’s scale and utility scale expertise, together with Sunseap’s regional knowledge and strong DG track-record. Fully in line with this logic, Sunseap’s Founders will be part of region’s top management team that will lead the business.

EDPR and Sunseap will embark on renewable energy projects across the Asia Pacific region, specifically solar and wind projects. There will also be opportunities for co-operation in energy storage and green hydrogen, among others. EDPR now has access to markets with growth in renewables of over 120 GW/year, representing approximately 75 percent of the expected global growth (2020-2030).

The closing of this transaction will allow EDPR to establish a headquarters for the Asia-Pacific region through Sunseap, with a sizeable portfolio including of close to 10 GW of renewable projects at different stages of development and an experienced team of more than 600 employees spread across 9 markets.

In Singapore, the push to make renewable energy more accessible to homes and businesses has gained momentum with the unveiling of the Singapore Green Plan 2030, a nationwide movement that is committed to a zero-carbon future.

“Sunseap, together with EDPR's complementary expertise, is now better equipped to drive the energy transition and mitigate climate change for the entire APAC region, fostering sustainability as a key engine for growth and green jobs and contributing to Singapore's ecosystem of clean energy” said Miguel Stilwell d'Andrade, CEO of EDP and EDPR.

Pedro Vasconcelos, COO APAC EDPR, said: “We are very pleased with the conclusion of this agreement with Sunseap.  The Asia Pacific region is a strategic market for us towards EDPR’s global positioning, with both high demand and growth potential in the renewable energy sector. Sunseap will undoubtedly become a key growth lever for EDP, whose presence in the region will in turn drive local economic development.”

Frank Phuan, Co-founder of Sunseap, added that with EDPR’s financial muscle and expertise in renewables, Sunseap will be able to accelerate growth plans and revolutionise the energy landscape in the region, as well as nurture the next generation of talents in the industry.

Singapore’s Economic Development Board (EDB), which aims to strengthen the country’s position as a global centre for business, innovation and talent, played a pivotal role in bringing both parties together.

Demand for renewable energy in Asia Pacific continues to surge, due mainly to a significant increase in new projects in China, India, and Australia. The region’s renewable investments could double to US$1.3 trillion by 2030, according to global energy research and consultancy group Wood Mackenzie.