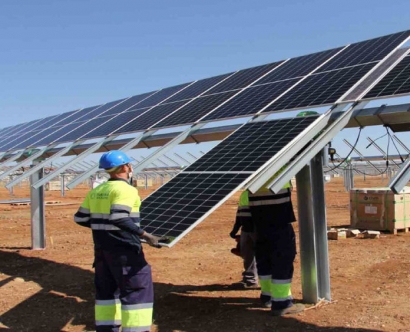 The photovoltaic plants, in which Endesa has invested €60 million, will add a combined installed capacity of 86 MW, and have been built in record time. More than 380 people, 70% of them from Malaga, worked following strict safety measures, on building these two photovoltaic plants, which will produce 171

GWh a year, equivalent to the energy that a municipality like Ronda consumes in a year. In the light of the ongoing pandemic and in line with the indications provided by health authorities, the company implemented rigorous safety protocols, with the aim to ensure the necessary protection of the workers involved in the construction as well as to the communities where the plants are being installed.

La Vega I and La Vega II carry a total of 224,600 photovoltaic panels, as well as 14 transformation centers, one electricity substation and around 50 kilometers of underground networks, which have been built for their operation. The complex has enabled today the generation of the first kilowatt-hours of renewable energy, which has already reached the Andalusian electricity distribution network. The two plants will avoid the emission into the atmosphere of more than 79,600 tons of CO2 annually.

The La Vega I and La Vega II photovoltaic plants carry the latest construction technology. Endesa is currently using virtual reality to monitor these facilities through smart glasses, which allow supervisors to remotely observe to the construction works without the need to physically reach the building area. In addition, this technology incorporates an infrared camera that gives a real-time view of construction and implementation activities.

For the construction of La Vega I and La Vega II, Endesa followed sustainable engineering criteria and applied the Enel Green Power "Sustainable Construction Site" model, including the installation of photovoltaic solar panels to cover some of the energy needs during the work, efficient lighting, separation of waste and the supply of several defibrillators to ensure workers' health. Now that the work has been completed, these measures will be donated to the municipality of Teba for public use.

Endesa's philosophy for building its renewable facilities is part of its “Creation of Shared Value” (CSV) program that has led the Company to undertake renewable training courses for more than 250 people from Teba and the surrounding area, most of them unemployed, who now have knowledge in the booming sector of assembling and dismantling photovoltaic installations.

In addition, in order to ensure the environmental compatibility of photovoltaic plants, a series of environmental actions have been put in place, aimed at conserving the natural values of the area. Work is, therefore, currently underway on the implementation of a program of complementary measures to encourage the habitat of the Montagu's harrier (Circus pygargus) and the little bustard (Tetrax tetrax), both species included in the vulnerable category of the Andalusian Catalogue of Endangered Species.

Endesa will also participate in financing an ambitious conservation project for the lesser kestrel (Falco naumanni), whose population has been suffering a significant decline in rural areas of Malaga over recent years. This action, which is being carried out in the Laguna de Fuente de Piedra Nature Reserve, in the municipality of Campillos, will allow new colonies to be established using novel techniques of captive breeding and release, thus contributing to strengthening the population of this small falcon in the area.

From today, Malaga has more renewable production that links with the six wind plants (the last commissioned a year ago) and 11 hydraulic plants that Endesa already has in the province. Paperwork for two more photovoltaic plants in the province to be added in the next few years will join the abovementioned plants.

Tags: Photovoltaic , Electricity , Renewable energy , SAF , Solar , CO2 , Waste , Wind
Add a comment
Annie
Thank you so much for sharing this helpful article to us, it is also good to see another interesting article coming from you. gold ira companies
Wella
Actually, I love what you did to this website. Please keep us posted. happy birthday quotes
biogas