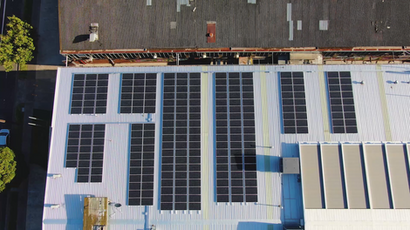 Australian craft brewer Moon Dog Brewing, based in Melbourne, opened its new brewery in October 2019 and subsequently began to explore ways in which it could reduce its carbon footprint. Globally, smaller independent brew pubs and large international beer companies have seen the potential that solar power holds when it comes to offsetting the energy-intensive process of beer-making.

Budweiser owned by AB InBev, signed the largest ever pan-European solar power deal for its 14 breweries spread across Europe in 2020, along with Heineken’s Sol brand committing to brewing with only 100 percent solar energy in the same year. Hot spots such as Australia, Italy, Germany, Singapore, Belgium, the Netherlands and the US are leading the charge when it comes to solarized breweries, and China is predicted to be ‘one to watch’ as the fastest growing market for beer consumption.

The Moon Dog team selected Energis, a leading residential and commercial energy solutions company, to design a solar system that would reduce their reliance on using energy from the grid and lower their energy costs.

“We chose Fimer for this installation because their inverters have a good track record in terms of reliability, technical support, and energy production, in both commercial and residential projects” said Raman Chhabra, Director of Energis. “The PVS-100 was also especially suited for the string sizing and other site-specific requirements for this project.”