Iberdrola Finalizes Construction of the Largest Photovoltaic Plant in Europe

Tuesday, 31 December 2019
0
REM
Europe's biggest photovoltaic plant has been completed by Iberdrola in just one year. The Núñez de Balboa project, which recently obtained its commissioning permit from the Ministry for Ecological Transition and for Red Eléctrica de España, has started energization tests. Based on these processes, the plant is forecast to start operations in the first quarter of 2020. 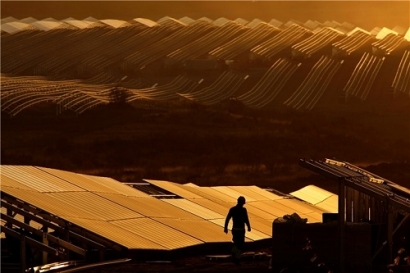 With the completion of Núñez de Balboa, with an installed capacity of 500 MW and an investment of nearly 300 million euros, Iberdrola moves forward in its plan to relaunch green energy in Spain, which envisages the installation of 3,000 MW by 2022, with Extremadura at the center of its strategy.

Núñez de Balboa extends over an area of some 1,000 hectares (2,470 acres) straddling the municipalities of Usagre, Hinojosa del Valle and Bienvenida in the province of Badajoz. The plant, promoted in collaboration with Ecoenergías del Guadiana, is a flagship renewable project that has broken records:

In addition to Núñez de Balboa (500 MW), the company has more than 1,300 MW in renewables in six pipeline photovoltaic projects: Francisco Pizarro (590 MW), located in Torrecillas de la Tiesa; Ceclavín (328 MW), in Alcántara; Arenales (150 MW), in Cáceres; Campo Arañuelo I, II and III (150 MW), in the district of Almaraz; and Majada Alata and San Antonio (50 MW each), in Cedillo. Furthermore it has 300 MW grid access available with which to plan another photovoltaic project.

Currently, the company's projects in construction and at the detail design stage - wind and photovoltaic - amount to more than 4,000 MW in Extremadura, Castilla-La Mancha, Castilla y León, Navarre, Aragon, Murcia, Cantabria and Andalusia.

In Spain, Iberdrola is the leader in renewable energies, with an installed capacity of 16,000 MW (over 30,300 MW worldwide), making its generation facilities some of the cleanest in the energy sector.

Iberdrola's commitment to a decarbonised economic model has led it to earmark 10 billion euros a year for investment in renewable energies, smart electricity distribution networks and storage technologies, on top of the 100 billion already invested since 2001.