Tuesday, 12 July 2011
1
Dan McCue
In the wake of the Fukushima Daiichi nuclear disaster in Japan, many have speculated about how the densely populated and resource poor country will meet its future energy needs. 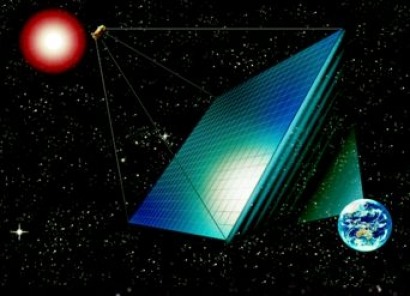 Today, five months and a day after the cataclysmic earthquake and tsunami the brought chaos and destruction to Japan’s northern prefectures, Japanese officials have yet to send a clear signal about whether they’ll continue what had been a robust nuclear power program, or whether they’ll instead seek to put their nation on a steady diet of renewables.

Against this backdrop, a dedicated band of engineers at the Japan Aerospace Exploration Agency (JAXA), along with corporate, agency and university partners, quietly continue to work on a project that if successful would not only solve Japan’s energy quandary by mid-century, but would undoubtedly revolutionize the entire solar energy sector in the process.

The project is a space solar array that the engineers envision someday orbiting the Earth – staying in perpetual sunshine – and beaming electricity from space in the form of either microwaves or lasers. The space agency’s best current estimates are that the effort will take nearly 30 years to come to fruition.

But when it does, the agency says, the solar array in space will send 1 GW of power back to the Earth. Based on the assumption that the power demand of a single home is 3 KW, the system – known by the acronym SSPS (for satellite solar power system), will supply power for about 300,000 homes.

Hoping to learn more about the project, Renewable Energy Magazine reached out to Tatsuhito Fujita, Associate Senior Engineer with the Advanced Mission Research Group at the Japanese space agency’s Innovative Technology Research Centre, with whom we exchanged questions and answers via email.

“After the accident of the nuclear power plant, interview requests from TV, newspaper and publishing companies have increased remarkably,” Fujita said from his office, which is part of Japan’s Aerospace Research and Development Directorate.

Early published reports about SSPS put its price tag at about two trillion yen (roughly $21 billion) and said a total of 16 Japanese firms, including Mitsubishi Heavy Industries Ltd, were participating in the project’s development.

Fujita, however, indicated that the “clear cost” of the SSPS project is not yet known.

“It’s something that we continue to study,” he explained. “Two trillion yen is the target for the total cost of developing SSPS, but it must be studied to determine whether this cost is feasible or not.”

Fujita went on to say that some of the original 16 companies involved in the effort are no longer participating, but also said JAXA has firm contracts with the others.

Right now, engineers in Tsukuba and at the Institute for Unmanned Space Experiment Free Flyer (USEF) in Tokyo are deep into the developing the technology needed to beam the electricity produced back to Earth.

Fujita said experiments of transmitting energy by microwave and laser are now the primary studies conducted in relation to the SSPS.

“Eventually, a determination will be made as to which will be most effective for our purposes,” Fujita said. “However, the selection of which to use is something that must be done in the future.”

To produce 1 GW of power, the solar power station will rely on a four km2 (approximately 2.5 square miles) array of photovoltaic panels to collect solar rays while orbiting some 36,000 km (22,500 miles) above the earth's surface.

Power will then be beamed to a receiving site that will be constructed at an as yet undetermined site off the Japanese coast.

From there the power will flow to the existing commercial power network, he added.

Of course, Japan isn’t the first country to consider the viability of the space-based collection of solar energy, nor is it the only country doing so now.

Then, in 1973, Dr. Peter Glaser was granted a US patent number for his method of transmitting power over long distances using microwaves from a very large antenna (up to one square kilometre) on the satellite to a much larger one, now known as a rectenna, on the ground.

Glaser’s work (he was then vice president of a firm called Arthur D. Little Inc.) caught the attention of the US space agency NASA, which asked Glaser and ADL to take the lead on a broader study.

While that study identified several barriers to the concept – including the expense of putting the required materials in orbit and the lack of experience on projects of this scale in space -- space-based solar power collection nevertheless showed enough promise to merit further investigation.

Between 1978 and 1981, the US Congress authorized the Dept. of Energy and NASA to jointly investigate the concept, a study that became known as the Satellite Power System Concept Development and Evaluation Program.

Although that project was discontinued, interest in the space-based harvesting of solar power revived in the late 1990s, and in 1997 NASA was directed to take a fresh look at the concept.

Two years later, NASA began its Space Solar Power Exploratory Research and Technology program (SERT). The group concluded that space solar power concepts were no longer the stuff of science fiction as the price of sending such a system, while still enormous, had come down considerably, and knowledge of solar power had advanced considerably since the 1960s.

“Space solar power may well emerge as a serious candidate among the options for meeting the energy demands of the 21st century,” the study committee said.

In all the US is estimated to have spent about $80 million to explore the possibilities of a space based solar system.

Japan entered the fray 15 to 20 years ago, after researchers at its National Space Development Agency of Japan (NASDA), the Institute of Space and Astronautical Science (ISAS) and some of its top university first proposed the country seriously consider solar as the way to meet its future energy needs.

More recently, Europe’s Astrium, an aerospace subsidiary of the European Aeronautic Defence and Space Company (EADS), announced that it too is developing new systems and technologies for transferring orbital solar energy to Earth.

For all that activity, however, there are still those who, like Dr. Pete Worden, a participant in the NASA studies, maintain that space-based solar is about five orders of magnitude more expensive than solar power gathered by panels in a desert, with a major cost being the transportation of materials to orbit.

Dr. Worden said as a result all possible solutions are merely speculative, and would not be available for decades at the earliest.

“SSPS can supply solar power to the earth more steadily than solar panel on the earth,” he said.

The Japanese realize the cost of building the solar station in orbit would be prohibitive at the moment, and that’s one reason for the methodical, but ceaseless work on the project.

“There are many technical challenges in order to realize SSPS,” Fujita said. “The main technical problems to solve are how to assemble such a large structure, increasing of efficiency of electrical equipment like the solar battery and the generator of microwave, and decreasing the cost of transportation.”

The first step in bringing the plans to fruition will be the launch in around 2020 of the Japanese Experiment Module (JEM) of the International Space Station. The module will be fitted with equipment that will beam electricity to Earth.

But getting from there to having a full-blown orbiting space solar system operational by around 2035 won’t be easy. Like any other project needing government funding to go on, JAXA’s SSPS project requires a regular renewal of support from Japanese officials.

“In the case of JAXA, that means the project can be carried out only if the budget for the project is accepted by the government,” Fujita said, explaining that once all demonstration tests are completed, a board with be assembled to review the project in terms of its feasibility, its cost and the perceived importance of the project.

“If the board judge that the plan is appropriate and the budget is ensured, the government accepts this project,” he said.

“If commercial SSPS is realized, I think not only the solar power industry but also the space industry will become very active,” he added.

Editor's note: If you are interested in the issue of renewable energies and space, why not check out Ankan Bhattacharya's blog on Renewable Energy Magazine which introduces exactly that topic.