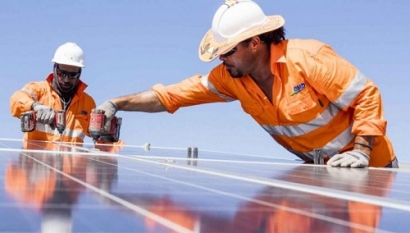 The second phase of the $59 million (US $45 million) project– dubbed Tranche Two – will begin this week. Tranche Two will deliver 5.6 MW of solar to 17 remote communities from Finke near the South Australian border up to Arnhem Land and the Tiwi Islands in the Top End.

ARENA has provided $31.5 million (US $24 million) off the total cost of the project, which is expected to cut diesel use by 15 percent, equivalent to 94 million litres over the life of the panels.

Tranche Two will include installing a 1MW of solar system on the Tiwi community Wurrumiyanga on Bathurst Island which will ultimately supply electricity to three Tiwi communities – including Wurrumiyanga, Pirlangimpi and Milikapiti – across Bathurst and Melville via a separate interconnection project.

The first stage Tranche One, which included an initial 10 off-grid Indigenous communities, was completed in 2017.

Late in 2017, Daly River, also known as Nauiyu, became the first Northern Territory community to be powered entirely by solar during daylight hours.

Daly River, with a population of over 400, was intended as a pilot for a high penetration renewable system, with a solar array alongside a 0.8 MW / 2 MWh lithium-ion battery.

“It’s a part of our Aboriginal culture that it’s the giver of life, we always look to the sun,” he said.

“Now the sun will come down, shine on (the panels), power our houses, and take care of the everyday aspects of life.”

Daly River’s new PV setup has allowed the community to switch off generators during the day, saving 400,000 litres of diesel per year.

ARENA CEO Ivor Frischknecht said the agency was proud to support this project which is bringing renewable energy to off-grid locations.

“As the largest roll out of solar PV to remote communities, this is a significant achievement that is four years in the making and one that ARENA is extremely proud to be supporting,” Frischknecht said.

Power and Water Chief Executive Michael Thomson says the corporation is delighted to partner with ARENA and the Northern Territory Government on this important project.

“This demonstrates how delivery of cost effective, renewable energy may be employed to provide reliable power to remote communities, where both energy demand and costs are high,” said Thomson.

“Reducing our reliance on diesel fuel in remote locations makes economic and environmental sense,” he said.