Monday, 18 March 2019
0
REM
Long View Forest and Encore Renewable Energy have commissioned a 745 kilowattpeak community solar array on three acres at the new Long View headquarters and woodyard on Ferry Road in Hartland, Vermont. The project is on a 28-acre remediated “brownfield” property formerly used as a saw mill and lumber treatment facility. Brownfields, because of prior environmental contamination, are deemed prime solar sites under Vermont regulations. 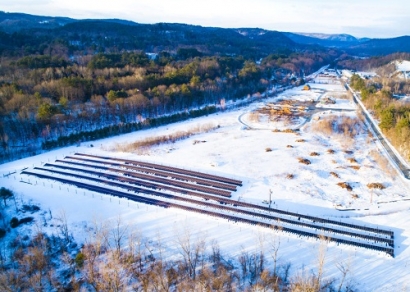 ”The solar array was a critical part of Long View’s plan to redevelop the brownfield site as a ‘forestry business park,’” said Jack Bell, General Manager of Long View. “The Ferry Road site is a prime location for our headquarters, log merchandizing yard, and other businesses that support jobs and sustainable forestry in the Upper Valley and beyond. We’re excited to continue our work to redevelop the Ferry Road site and generate renewable power.”

The project is expected to produce approximately 900,000 kWh per year, enough to power approximately 125 homes annually. Long View, an employee-owned forest management and contracting company, selected Encore as its turnkey partner to develop and construct the project based on Encore’s proven track record of reclaiming undervalued real estate for community-scale solar PV systems.

Mascoma Bank provided the debt-financing for the project and entered into a long-term agreement to purchase the net metering credits generated by the project. The project first generated electricity in December, and is now generating savings for Mascoma as well as the Montshire Museum of Science located in Norwich, Vermont. Together, Mascoma and the Montshire Museum of Science will realize approximately $700,000 of savings on their electricity bills over the 25-year term of the agreement.

The Renewable Energy Certificates produced by the project will be conveyed to Green Mountain Power to help meet Vermont’s Renewable Energy Standard (RES) to produce 75 percent of the state’s electric generation with renewables by 2032.

“Developing solar projects on undervalued real estate is an emerging market for community-scale solar systems because it’s a good deal for everyone involved,” said Chad Farrell, CEO of Encore Renewable Energy. “It turns land that has previously been neglected into an economic driver for the community, supports Vermont’s transition to a clean energy economy, and saves customers money long-term. It’s a win-win-win proposition.”