Wednesday, 14 August 2013
5
Richard Crume
Public support for renewable energy in the U.S. is slipping as profits for natural gas soar. Many Americans seem convinced that serious measures to reduce climate change gases would harm the fragile economy, and anyway, the effects of climate change are years away. 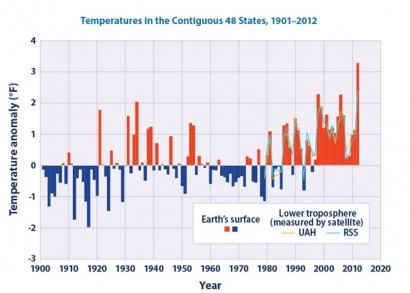 However, a recent report from the U.S. Department of Energy (DOE), U.S. Energy Sector Vulnerabilities to Climate Change and Extreme Weather, demonstrates that climate change is here today and that the energy sector is already suffering from its effects.

According to the report:

Increasing temperatures, decreasing water availability, more intense storm events, and sea level rise will        each independently, and in some cases in combination, affect the ability of the United States to produce        and transmit electricity from fossil, nuclear, and existing and emerging renewable energy sources.

Fossil-fuel and nuclear power plants, hydraulic fracturing, and oil and gas production facilities are all at risk from higher water and air temperatures and from reduced water supply. Additionally, electric transmission lines operate less efficiently when air temperatures are higher, and they face greater chances of damage in storms and forest fires made worse by global warming.

The DOE report provides 30 examples of how climate change is already affecting the energy sector, including the following five cases:

Many climate effects are compounded and interdependent. For example, higher air temperatures will result in reduced electric power generation and availability due to: (1) cooling waters that are too warm, and (2) less efficient electricity transmission across power lines. At the same time, electricity demand will increase as homes and businesses run air conditioners more frequently.

While the magnitude and timing of climate change remain uncertain, there is near- consensus among scientists that the earth will continue warming and that weather events will become more extreme. (See figure above on U.S. temperature anomalies).

However, the DOE report cautions about planning for these more predictable changes while overlooking the “lower probability, higher warming scenarios with potentially more severe impacts [that] may be characterized by thresholds or points beyond which there are irreversible changes.” This is the tipping point scenario that climate change experts have been warning about. Unfortunately, we may not know if we are approaching the tipping point until it is too late to reverse course.  Some experts think it may already be too late.

The U.S. Energy Information Administration’s Annual Energy Outlook 2013 projects that the share of electricity generation from renewable energy may grow to just 16 percent by 2040. This growth could be even less, around 14 percent, if natural gas prices are lower than projected. On the other hand, renewable energy could represent as much as 23 to 31 percent of U.S. electricity generation with more aggressive, broad-based policies to reduce greenhouse gas emissions.

These policies are desperately needed. It is past time for our climate change-denying politicians to stop grandstanding for a select group of wealthy contributors and to begin paying attention to the scientific facts.