Wednesday, 09 April 2014
2
REM
The Concentrated Solar power market totaled  $1.3 billion in 2013 and is anticipated to reach $53.7 billion by 2020, according to a new analysis by WinterGreen Research. 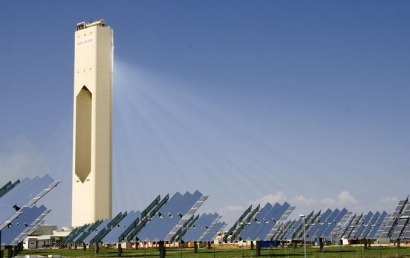 The reason, the analysts say, is because the systems are able to be built at utility scale and to provide 24 x 7 solar renewable energy power.

In addition, campus stationary fuel cell power is mature and available to act as a backup power source for CSP, creating greater capabilities and a better story for justifying the build out of CSP.

The latest CSP launch, Ivanpah solar electric generating system is an engineering marvel that delivers on the full promise of solar energy. Ivanpah has 347,000 garage door-sized mirrors distributed across 173,500 heliostats.

The heliostats track with the sun so that the mirrors can efficiently reflect its rays up to boilers that sit on top of the facility’s three towers. The system uses solar field integration software and a solar receiver steam generator.

Concentrating solar power is one of several preferred methods of solar electricity production. In most places it has achieved ‘grid-parity’ when considering ROI over 35 years. The mainstream cost of electricity from the grid can be complemented by solar systems. The solar industry in China is funded by the government. This unrelenting investment in energy efficiency has thrust the Chinese companies into the forefront of the industry.

Other countries rely on tax incentives and special tariffs to sustain further investment in solar electricity generation. This has enabled the industry to develop and provides very attractive investment opportunities, and is expected to do so for some time to come.

There is a move in the solar industry to achieve grid-parity. Once this is secure, the solar market can expand very rapidly achieving penetration growth calculations that exceed any growth rate per se. A step-change in system costs is being achieved, putting the industry on the cusp of a major growth spurt. Concentrating solar technology uses traditional electricity steam generators to make power fueled by solar heat.

According to the analysts, the decrease in the costs of implementing CSP solar energy will continue.