Wednesday, 28 September 2022
0
Robin Whitlock
Hystar AS has announced that Yara Clean Ammonia has joined the HyPilot project, which will see the first in-field test of Hystar’s 1 MW containerised electrolyser. 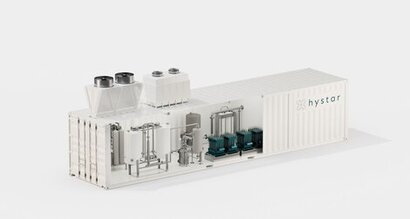 HyPilot will verify Hystar’s patented PEM technology under realistic field conditions, using a containerised PEM electrolyser, in partnership with industry leaders. The electrolyser will be run for a total of 10,000 hours, providing performance data from various operating regimes to verify long-term commercial operation.

As a key player in offshore wind, Equinor will demonstrate dynamic hydrogen production tailored to suit the variable output typically found in wind applications. Therefore, testing and verification will be conducted both in ‘efficiency’ and ‘dynamic’ modes, ensuring HyPilot drives value both in renewable energy generation and the optimisation of the production of green hydrogen in industrial processes.

Compared to conventional PEM electrolysers, the membrane in Hystar’s patented design is significantly thinner, providing better efficiency due to lower resistance across the membrane. Hystar’s unrivalled efficiencies mark a key step in making green hydrogen production cheaper, supporting the global transition to clean energy across a range of high-emission sectors.

HyPilot will further drive ambitious and targeted industry efforts to reduce carbon emissions and realise the potential of hydrogen, with the IEA predicting that the cost of producing hydrogen from renewable electricity could fall 30 percent by 2030. Hystar’s recent test results show we are already able to meet or even exceed the European targets.

“HyPilot marks a significant moment for the hydrogen industry, bringing together leading industry names to showcase Hystar’s patented, ultra-efficient electrolysers” said Fredrik Mowill, CEO of Hystar. “The announcement is a key step towards scaling up and enabling widespread commercial deployment of large-scale green hydrogen production. We are pleased that Yara, Enova, Equinor, and Gassco share our vision of commercializing technology for lower-cost green hydrogen. Working together in the years ahead will enable us to drive unseen levels of cost and production efficiencies across hard-to-abate sectors.”

Lise Winther, SVP Upstream Projects & Technologies in Yara Clean Ammonia, added that the knowledge gained from the HyPilot project will give valuable input to the company’s work in developing green ammonia for fertiliser, deep-sea shipping, and power production.

Ahead of the HyPilot launch, Hystar had already engineered and designed the novel concept, having undertaken two years of stack optimisation and more than 5,000 hours of testing. As a spinoff company of SINTEF, one of Europe's largest independent research organizations, Hystar has a background of over 15 years of research into PEM technology. Over the coming months, Hystar will engage in the construction of a complete, autonomous, containerised PEM electrolyser, with a hydrogen production capacity of up to 500 kg/day.