Friday, 17 May 2019
0
Robin Whitlock
Acciona has installed flexible organic solar PV modules in a wind turbine tower in the Breña Wind Farm (Albacete, Spain) in order to cover the consumption of the turbine’s auxiliary systems. 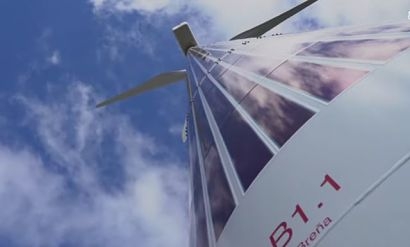 The project consists of covering a wind turbine tower with flexible organic panels to produce energy for the internal electricity consumption of the turbine. It will allow the testing of organic PV panels and their application to optimise the efficiency of wind power generation. Acciona owns and operates the Breña Wind Farm and the turbine selected for the project is a Nordex-Acciona Windpower AW77/1500 wind turbine mounted on an 80 metre high steel tower.

Installed on the tower are 120 solar panels facing southeast-southwest to capture the maximum of the sun's rays throughout the day. They are distributed at eight different heights, occupying around 50 metres of the tower's surface area. The photovoltaic modules, with an overall capacity of 9.36 kilowatts peak (kWp), are of Heliatek technology (HeliaSol 308-5986 model). They are only 1 millimetre thick, and each one has a surface area of 5,986 x 308 mm.

In contrast to the conventional technology used in the manufacture of photovoltaic models based on silicon, these organic panels use carbon as raw material and are characterised by their structural flexibility, which makes them adaptable to very different surfaces. Other key features are lower maintenance costs, less energy consumption during manufacture, easier logistics and the complete recycling of the materials used, although their efficiency is still below that of silicon modules.

“The hybridization project in Breña means the optimisation of the use of space for renewable energy production and it will enable us to test the efficiency of organic photovoltaics, a technology that we believe has one of the best improvement curves in terms of technological efficiency” said Belén Linares, Energy Innovation Director in Acciona. “That is why we have decided to pilot it”.

The immediate application of the Breña project is to produce part of the energy that the internal systems of the wind turbine need. When the turbine is running, some of the energy generated is used to power the auxiliary systems. In shutdown mode, certain systems need to continue functioning so they are fed from the grid, which means that the wind turbine is registering a net consumption of energy.

The new photovoltaic system with panels on the tower will be able to cover, completely or partially, the energy demand related to the operation of the wind turbine when there is solar radiation, or even -in a possible later phase of the project- when the sun is not shining. This would be done through a battery storage system, leading to an improvement in the net production sent to the grid.

The organic panels are connected to two inverters that convert DC into AC for later connection to the grid which supplies the electrical equipment of the wind turbine.

The entire system is monitored with a view to evaluating it under real conditions, both from the point of view of energy production and degradation of the solar modules. Conceptually, it is a very innovative design in relation to previous experiences in wind power-photovoltaic hybridization, based on panels installed on the ground.

The idea is part of a wide-ranging innovation project driven by Acciona to study a number of emerging photovoltaic technologies, with the aim of pioneering the adoption of more efficient solutions in each case and consolidating its leadership as a PV developer. The company currently has over 1,200 MWp in operation or under construction in different parts of the world.