Friday, 24 May 2019
0
REM
UK companies, Accolade Wines and CleanEarth, have achieved a first in the region with the installation of a 2.5 MW wind turbine to power Accolade Wine’s  Avonmouth distribution center - a facility they lease from a commercial landlord. 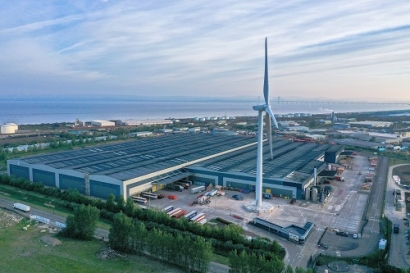 While other businesses have invested in on-site wind generation, it has historically been those that own their own property and therefore have control over how the real estate is managed. For Accolade Wines, the key to unlocking the benefits of wind power ultimately rested with the owner of the 80,000 sq m site.

Working in partnership with renewable energy specialists CleanEarth, the positive environmental and economic impacts of the project were clear from the outset. As Richard Lloyd, Accolade Wines' General Manager of European Operations observed, "This single turbine will save 2,500 tonnes in carbon emissions every year while significantly reducing our energy bills.

"Our commitment to identifying and delivering sustainable operations is passionately owned by everyone at Accolade Wines. The urgent need to decarbonize our electricity was becoming more evident and having our own wind turbine was the optimum solution," said Lloyd.

This vision was shared by CleanEarth. In the words of CleanEarth's Managing Director, Dean Robson, "This was never going to be easy. But we knew that it was achievable with the right partner. We're proud to have worked alongside Accolade Wines.”

While Accolade Wines and CleanEarth were convinced of the plan's merit from the earliest stages, two further stakeholders, the local planning authority and the owner of Accolade Park, needed to be in agreement if the project was to progress.

Despite the restrictive regulations that govern onshore wind development in England, Bristol's planning authority quickly recognized the contribution the turbine would make to the city's ambitious carbon reduction targets. And with strong support from the local community, there were no major barriers to granting planning consent.

The final requirement  was to get the landlord on board - and this is where so many similar projects have foundered. As Robson explained, "We've talked to numerous businesses that would go for wind generation without hesitation, but because they don't own the building they assume it's a non-starter."

Two key things made a difference in this case: the unwavering commitment of Accolade Wines to making it happen, and the landlord's recognition that responsibility for developing carbon-free industry rests with everybody involved, not just with the businesses that consume the most energy.

Charlie Seaton, a Director of Roebuck Asset Management, who manage Accolade Park on behalf of the owners commented, "This is a pioneering renewable energy initiative in the commercial property sector, but entirely fitting for a tenant as progressive as Accolade Wines. We are confident it will set a precedent that others are sure to follow. "

Industrial sites such as Accolade Park are ideal candidates for wind generation. They're where the electricity is needed, are removed from residential properties and are far less prone to the aesthetic sensitivities that often stand in the way of planning approval.

Until now these opportunities have gone largely unexplored due to the legal complexities and negative perceptions around landlord cooperation.

The determination of Accolade Wines and CleanEarth, the ambition of Bristol's planning authority, and the vision of Roebuck Asset Management, all combined to achieve what many said could not be done.