Friday, 20 December 2019
0
REM
El Campo, La Estanca, Loma Gorda and Santo Domingo de Luna total almost 100 MW (98 MW), are located in the province of Zaragoza, have required investment of €100 million and will generate -according to EGPE- approximately 360 GWh of electricity per year. With them, the number of parks that the company has connected in Aragon in recent weeks has risen to eight, after those of Sierra Costera I (Teruel) and Campoliva I, Campoliva II and Primoral (Zaragoza). EGPE is Enel Green Power España, the renewable energy subsidiary of Endesa. 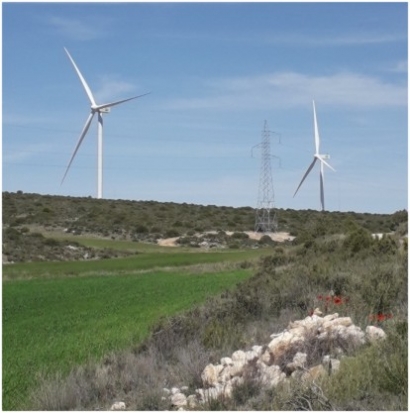 The development of these four new wind farms responds to Endesa's strategy (EGPE is its subsidiary) to reach 10.2 GW (now has 7.4) of renewable installed capacity in 2022, a goal for which the Italian company expects to spend approximately of €3.8 billion. The ultimate goal of that strategy is to achieve a clean generation mix - without emissions - in 2050. EGPE was awarded 540 MW of wind and 339 MW of solar at government auctions held in May 2017, which will, according to Endesa, require a total investment of more than €800 million. At this time, the company has already connected to the network the 339 MW of solar and some 285 MW of wind, and the construction and connection of the remaining wind projects are finalized, which ensures "they will be ready by the end of the year".

The El Campo wind farm, consisting of six turbines, can generate 75 GWh of electricity per year, enough energy - according to Endesa - to supply more than 19,100 families. The company estimates that the entry into operation of El Campo will prevent the emission of more than 49,000 tons of CO2 annually into the atmosphere. The park is located in the municipality of Mallén and Fréscano, in the province of Zaragoza. Work for its construction began on January 21, 2019 and ended on November 21. His connection to the network occurred on December 13.

The La Estanca wind farm has eight wind turbines that provide a total power of 24 MW. The Estanca will produce 97 GWh per year, "enough to supply energy to some 24,500 families, and avoid the annual emission of some 63,500 tons of CO2 into the atmosphere." Its construction began on March 25, 2019 and ended on November 21, 2019. It was connected to the network on December 13. Enel Green Power España, with 51 percent, and Bancale, with the remaining 49 percent participate in the shareholding of this park. It is located in the Zaragoza towns of Mallén and Fréscano.

The Loma Gorda wind farm, consisting of seven turbines, will be able to generate - according to EGPE estimates - 70 GW each year, "sufficient energy to supply 17,800 families." Their entry into operation - the company adds - will prevent the emission of approximately 46,000 annual tons of CO2 into the atmosphere. " It is located in Fuendetodos (Zaragoza). The construction work began on October 5, 2018 and ended on October 31, October 2019. The network connection occurred on November 29, 2019.

The Santo Domingo de Luna wind farm has a capacity of 30 MW and nine wind turbines. "It will produce 116 GWh per year, enough to supply power to 29,500 families, and avoid the annual emission of 76,000 tons of CO2 into the atmosphere." Its construction began on November 20, 2018 and ended on September 27, 2019. It was connected to the network on November 18. It is located in the Zaragoza towns of Luna, Las Pedrosas and Sierra de Luna. Enel Green Power España, with 51percent, and General Eólica Aragonesa, with the remaining 49 percent, participate in the shareholding of this plant.

José Bogas, CEO of Endesa, said,  “Endesa is already finalizing the connection to the network of the 879 renewable MW awarded in the 2017 auction, which demonstrates the company's commitment to meeting the commitments acquired in the tenders launched by government. This is a great step forward in Endesa's commitment to the production of clean energy, which is one of the pillars of the Spanish energy transition policy.”

Enel Green Power, the global renewable energy business line of the Enel Group, to which Endesa belongs, is dedicated to the development and operation of renewables worldwide, with a presence in Europe, America, Asia, Africa and Oceania. According to its public company profile, Enel Green Power manages about 46 GW in a generation combination that includes wind, solar, geothermal and hydroelectric.