Friday, 04 March 2022
0
REM
New York City Mayor Eric Adams has announced an agreement that will transform the city-owned South Brooklyn Marine Terminal (SBMT) into one of the largest offshore wind port facilities in the nation. The agreement will help establish New York as a leader in offshore wind and help the New York City meet its nation-leading climate goals of 100 percent clean electricity by 2040. 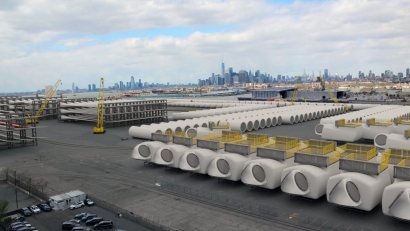 As part of the deal finalized by the New York City Economic Development Corporation, Equinor, its partner — bp — and Sustainable South Brooklyn Marine Terminal, L.P. (SSBMT) will upgrade and build out the terminal as an operations and maintenance base. The terminal will become a power interconnection site for the Empire Wind 1 project, and heavy lift platforms will be built on the 39th Street Pier for wind turbine staging and installation for Equinor and other developers. The port will serve as a hub to support the Empire Wind and Beacon Wind offshore wind farms.

NYCEDC also partnered with Equinor and the community to support workforce training for a diverse pool of local residents to bolster opportunities for New Yorkers created by investments in offshore wind infrastructure. The agreement expands the target of minority- and women-owned business enterprise (M/WBE) contractors based in and registered with New York City or New York State, with a 30 percent M/WBE participation goal; and will support technical assistance for M/WBE and Disadvantaged Business Enterprises to create more opportunities for participation in this sustainable growth industry. Additionally, the agreement ensures the development will be a low-emissions facility.

“With this investment, the South Brooklyn Marine Terminal will soon be transformed into one of the largest offshore wind port facilities in the nation,” said Mayor Eric Adams. “This site will be the launch of a whole new industry for New York City that will support 13,000 local jobs over time, generate $1.3 billion in average annual investment citywide, and significantly reduce our carbon footprint so that we can meet our climate goals of 100 percent clean electricity by 2040. This is a transformative moment for New York City and our clean energy future — a future of sustainable power, good-paying jobs, and climate justice.”

The announcement is critical to the offshore wind priorities and investments of both New York City and New York State. The city has committed $191 million to offshore wind projects — including $57 million in support of SBMT and $134 million in new investments. The city expects these initiatives to remove more than 34 million tons of CO2 from the environment — the equivalent of removing nearly 500,000 cars from roadways for 15 years — while creating 13,000 jobs related to offshore wind infrastructure across the five boroughs. SBMT will be essential to the state’s offshore wind supply chain. Currently, five offshore wind projects are in active development, which will power more than 2.4 million New York’s homes and bring a combined economic impact of $12.1 billion to the state.

n 2018, NYCEDC selected SSBMT — in a partnership between Industry City and Red Hook Terminals — as the leaseholder to reactivate the South Brooklyn Marine Terminal so that it can create a 21st-century maritime shipping hub with an on-site facility to train local talent. Under this agreement, SSBMT is entering into a sublease with Equinor and bp until 2054 for its operations and maintenance base, and its onshore substation. Under the same agreement, Equinor and bp will have a 10-year term for turbine staging and installation activities with an option to extend the 10-year term for up to six additional years.

“This agreement marks a major step forward in our commitment to New York State to both provide renewable power and to spark fresh economic activity, while creating enduring jobs,” said Siri Espedal Kindem, president, Equinor Wind U.S. “With the support of NYCEDC, SSBMT, and our partners in the community, Equinor and bp are ready and eager to invest in the revitalization of SBMT — an historic port that will soon become a major part of New York’s energy future. New York has shown unflagging determination to become a focal point of the region’s offshore wind industry, and this agreement offers tangible evidence that this vision is quickly coming to life.”

New York City’s goal is to have 70 percent of its energy consumption come from renewable sources by 2030. Under the nation-leading Climate Leadership and Community Protection Act, New York State has set goals of securing 70 percent of the state's electricity from renewable energy by 2030 and the installation of nine gigawatts of offshore wind by 2035. Equinor and bp have contracts for three offshore wind projects in New York — totaling more than 3,000 megawatts of clean, renewable energy.

In January, New York Governor Kathy Hochul announced the state finalized contracts for Equinor and bp’s Empire Wind 2 and Beacon Wind projects off Long Island, which unlocked an unprecedented public and private funding commitment of $644 million in port infrastructure, including more than $287 million for SBMT. As part of an award from NYSERDA, the developers will convert SBMT and the Port of Albany into large-scale offshore wind industry facilities.

Further, in December 2021, the U.S. Department of Transportation awarded the full $25 million that the city requested from the federal Maritime Administration (MARAD) through the 2021 Port Infrastructure Development Grants (PIDP). The grant for the “SBMT 35th Street Pier Expansion Project” at Sunset Park is intended to add a barge berth and a heavy-lift crane pad on the western end of the 35th Street Pier. The PIDP grant provides additional funds to expand on city, state, and Equinor funding for 39th Street Pier improvements, as well as Equinor’s operations and maintenance facility and Equinor’s interconnection substation. The addition of 35th Street Pier improvements increases SBMT’s cargo throughput capacity and operational efficiencies, allowing SBMT to further serve the growth of the offshore wind industry in New York City.